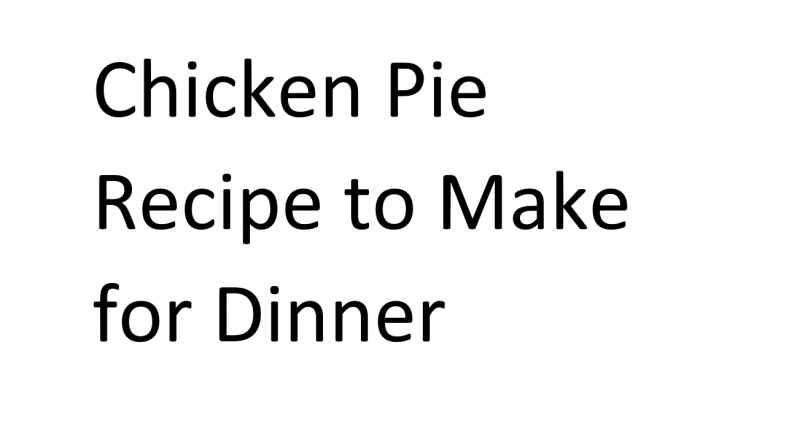 Chicken Pie Recipes are a classic at the American dinner table. Even though you could buy a frozen one from some company like Banquet, making it is so much more rewarding.

Everybody loves the taste of that buttery, flaky crust over all that delicious gravy-like sauce full of protein and veggies. This is making my mouth get awfully watery.

1 box of refrigerated Pillsbury Pie Crusts (2 Count) or Marie Callender’s. Follow directions on the box to soften them appropriately.

Preheat your oven to 425 degrees F and set a medium sized (2-quart-ish) saucepan over medium heat.

Put the 1/3 cup of butter in the pan and melt it. Then, add the 1/3 cup onion and stir for 2 minutes until the onion is tender.

Next, stir in your 1/4 teaspoon of salt. Let’s be honest, it’s basically a pinch of salt, you probably don’t need to measure that out. Throw in the 1/3 cup of flour and stir that around really well. We don’t want any clumping in this chicken pie recipe.

Your 1/4 teaspoon of pepper is up next. Throw that in and mix it around.

After that, stir in the chicken and mixed vegetables. Set the pan aside (off the heat) and start pouring the mixture into a pan lined with the pie crust for this chicken pie recipe.

Set the second crust on top, covering the mixture in the first one. Take a small knife and cut a bunch of slits in the top crust. Put it in the oven for 30 to 40 minutes. When it’s done, the crust should be golden brown.

In about the last 18 minutes of baking, put strips of foil on the crust’s edges to prevent over-browning. Once it’s out of the oven, set it on the windowsill so it can cool like a pie in a Disney movie and all the animals/Jim Belushi’s in the neighborhood will wander over sniffing for the glorious thing their noses have picked up.