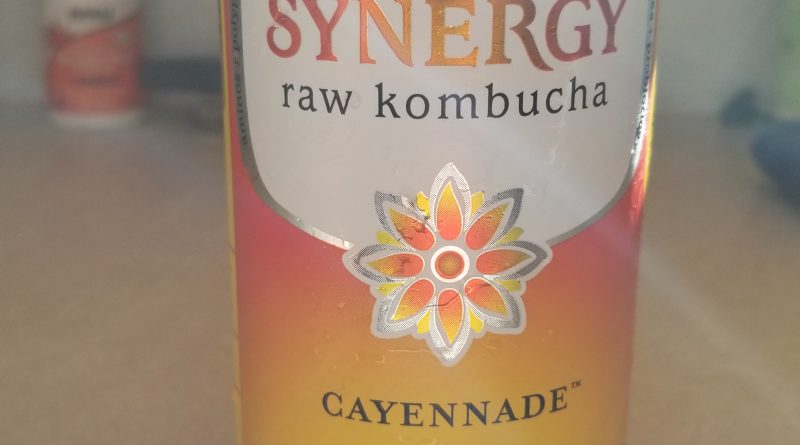 Synergy Cayennade kombucha is what I’ll be having for this Trader Joe’s drink review. At the end, you can also take the opportunity to leave your own review of it if you want. This looks like it should pair pretty well with most snacks, although, I’ll just be having some by itself.

This isn’t the first kombucha that I’ve had before. But I’ll be honest, it is the first one that I’ve ever bought off the shelf. Every other time, there’s been one in the fridge at my parents’ place that I’ve grabbed because it looked interesting.

*Quick disclaimer – this contain some alcohol, must be 21 or older to have it

Why I Bought This Synergy Cayennade kombucha

The main reason why I picked one of these up was because of the benefits. I’ve heard from countless sources at this point that this type of drink is good for your gut health. According to the label, there’s 9 billion living probiotics in it. In a sense, that makes me feel kind of gross drinking 9 billion living things.

Either way, no aliens have popped out of me yet, so I’d say that’s a good sign that it’s probably safe.

Let’s take a look at the nutrition facts for this Synergy Cayennade kombucha.

For being a decently sized bottle, there really aren’t many calories in there. You get 60 calories per serving and each bottle is a serving. There’s a small amount of carbs that you get from the added sugar in this Synergy Cayennade kombucha, though. Here are a few of the different organisms in this:

That is made up of kombucha culture, black tea, green tea, and kiwi juice. All are organically produced. Then, it’s got fresh pressed ginger juice in it, lemon juice, freshed pressed (that must be a typo – probably supposed to be “fresh” pressed) and cayenne. There’s also 100% pure love. I wonder what the FDA has to say about that.

Either way, that’s it. It’s also gluten-free, vegan, and non-GMO.

Alright, so the first thing that I did wrong when I reviewed this was shaking it. Bad, bad, bad. I would have known that if I’d read the label on the back of the bottle, but I was in a rush to have a healthy gut. I did actually open it up a little bit and almost started drinking from it, but then I closed it again and did the shake.

Anyway, after I got the rug cleaned up, I got the bottle washed off, dried, and actually had some. It wasn’t too bad. Bubbly, gingery, very good. This is already sort of an alcoholic drink, but I feel like this would be a really great mixer to add whiskey to or something like that.

The taste was hard to describe. Outside of the ginger flavoring, it was pretty unique.