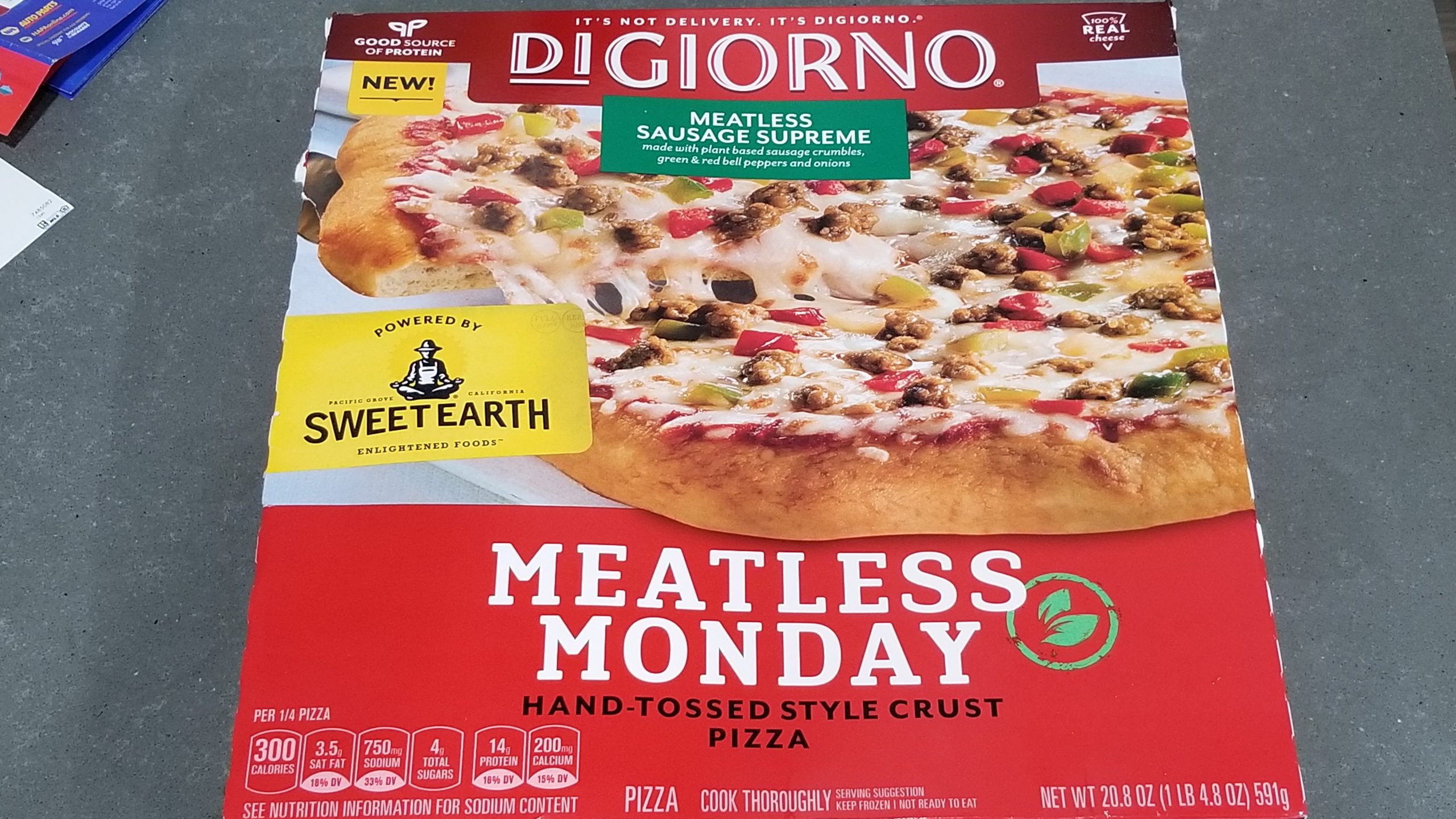 DiGiorno meatless sausage supreme pizza is on the table tonight. After a few weeks of looking at different breakfast items, we’re getting back to our Midnight Snack roots with a frozen pizza.

This one should be interesting because it’s made of plant-based meat, which has had mixed reviews as it’s risen to prominence in the last few years. We’ll also take a look at the company behind the meat below.

DiGiorno pizzas were originally introduced back in 1995 by Kraft. The brand was initially introduced to have pasta and sauces back in 1991, but later switched over to the pizzas that we mistake for delivery today.

It seems pretty hard to miss the slogan “it’s not delivery, it’s DiGiorno.” Almost any time we’ve had pizzas by them, they have been pretty good.

Kraft sort of doesn’t exist anymore, because of different splits and other factors over time. Mondelez International is pretty much Kraft at this point. Parts of it are also owned by Kraft Heinz.

Today, the DiGiorno brand is owned by Nestle and has been for the last 10 years. Because of that, we have occasionally seen crazy combos like Toll House cookie dough + Digiorno pizza. This DiGiorno meatless sausage supreme, though, is its own pizza and not accompanied by any guests.

These include bowls, burritos, pizza, plant-based burgers, empanadas and a ton of other interesting meals. They partnered with Nestle to bring us this DiGiorno meatless sausage supreme pizza today.

These pizzas contain 300 calories per serving. You could probably get away with eating the entire thing like I did and still be okay, though. Your daily sodium would be through the roof if you did that, but, everything else would still be under 100%.

The amount of fat and trans fat in the DiGiorno Meatless Supreme Pizza is not outrageous or anything. Same with the cholesterol or carbs. There’s a good bit of plant-based protein in there, too.

You’re also looking at almost 80% of your daily iron serving if you decide to eat all of it.

This starts off with the ingredients being a little rough. The enriched wheat flour is what I’m talking about there. Between the niacin, reduced iron, thiamine mononitrate, yea we can stop there.

Plant-based sausage crumbles from Sweet Earth Foods are in there. It’s neat to be able to see what goes into the fake sausage for the DiGiorno meatless sausage supreme. I purchased some protein powder from the company Naked Nutrition in my cabinet that’s pea-based. It’s pretty good!

The instructions to make this are pretty straightforward. You’re going to need to be pre-heating the ol’ oven to 375 degrees and popping that pizza in there on the center rack.

Then, bake it 17-19 minutes. In our case, we actually had to bake the DiGiorno Meatless Supreme sausage pizza for a total of an extra 6-7 minutes since it looked too soft after 19. That wasn’t the end of the world.

The crust was kind of hard, so the extra cooking time may have been unnecessary. Oh well, not the end of the world.

This was a new pizza concept among the ever-growing meatless movement we’ve see in places like White Castle and Burger King lately. I actually couldn’t tell the difference between this sausage and regular sausage made with meat.

The only thing that tasted different was the seasoning. There was something very different about that. As mentioned before, I did cook this for a few extra minutes.

The veggies tasted like pretty normal frozen pizza veggies. Not amazing, not bad.

This did taste a little like a frozen pizza, although, only a blind taste test could verify any differences between this one and a delivery brand. It passed the room-temperature taste-test after I left a few extra slices on the stove for an hour, that was good.

It also passed the “cold fridge pizza” test after I wrapped it in tinfoil and got it nice and cold after a few hours in the fridge.