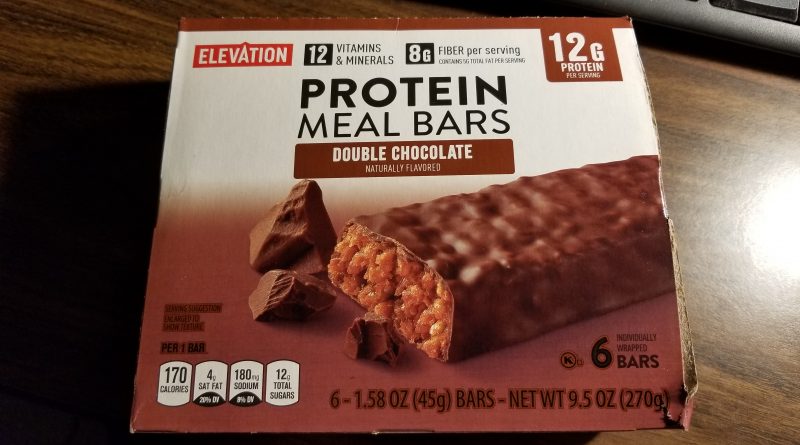 Elevation double chocolate protein bars are on my plate tonight. I guess it’s not really a plate so much as in my hand.

I actually unwrapped and stuffed one in my mouth before I even got home. There’s something oddly satisfying about doing that at the first stoplight after saving some money and leaving an Aldi. Considering I’d just been to the gym before going there, the cram-eating was justified.

Anyhow, I’ve decided to plow through a lot of products from Aldi lately because on top of being cheap, they’re actually pretty good. Plus, I’m trying to make a nightly writing habit here. It’s better than swiping on Bumble with Hulu on in the background.

So let’s get to it with these elevation double chocolate protein bars.

A Little on Protein Bars

Enjoying protein bars is definitely an acquired taste. Back in the day, I always thought nutrition bars were terrible tasting. Now that things have shifted around in my brain compartments and departments, I really do enjoy the taste of these.

A lot of them taste the same, frankly. Most have this light and crunch consistency, sort of like a healthier version of a crunch bar. Of course, they all have extra helpings of protein loaded in. It’s still usually not as much as I want to see, but I’ll take what I can get.

Most protein shake powders will pack around 24 grams of protein per serving. That’s tough to find in general with a bar.

These bars are pretty run of the Millville (sorry couldn’t help it) when it comes to the amount of protein they have. It’s not a bad thing, they’re actually very snackable and only have 170 calories in there. The bar itself felt more filling that 170, actually but yea. There’s a surprising amount of saturated fat in these (20% of your daily value). That scares me a little bit since I ate two and also two 85% dark chocolate bars.

Not sure if you have the same issue that I do, but, whenever I eat too much saturated fat I can’t sleep well. Could just be me, but that’s why keto ain’t ma thing. There’s a nice chunk of fiber in these bad boys, 29% of your daily value, not too shabby. Then there’s 20% of your daily value of sugar. These elevation double chocolate protein bars pack a lot of stuff!

Time to take a look at the ingredients in the elevation double chocolate protein bars. Arguably just as important as the nutrition facts, this has too much in it for me to cover in a ton of detail. First of, the thing’s loaded with nutrients. Like, you won’t be starving for iron if you eat this thing.

You’ll see pretty much every letter of the alphabet here folks. A, B, C, even down to Z with 25% of your daily zinc. That’s just from the ingredient list, check out this shot of all the ingredient names:

Go away maltodextrin, nobody wants you here. On second thought, whatever, it all tastes good. It might be interesting to have it without that ingredient, though.

I hope I didn’t give too much away about this thing during the opening here, but let’s do the actual review. If I had to compare the Elevation double chocolate Protein Meal Bars to anything else out there, I’d say they most closely mimic Cliff Builder’s Bars. That’s in terms of the outer texture and inner. A major difference between these and those is the calories, however. A regular one of those gets up close to 290 calories.

For someone like me, that makes sense. At the same time, though, I like the option of a lower calorie but also very filling bar.

The elevation double chocolate protein bars are tasty, no question about it. Also very chocolatey as their name implies.