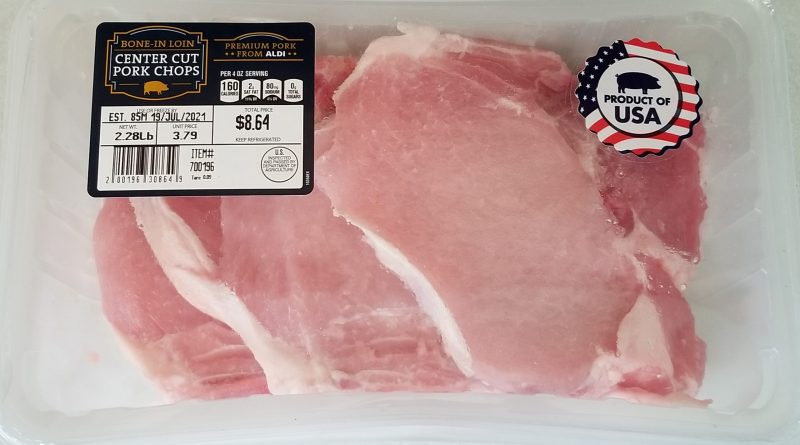 Center Cut Pork Chops From Aldi are on my plate for the review today. They’re looking pretty porky, to be blunt about it. Nice and pink, 2.28 pounds of some solid looking chops.

I’ve bought some other meat here before, like bacon-wrapped steaks or chicken, but this is my first round of trying their pork. I know that some people shy away from this for dietary or religious reasons, which is fine too.

Personally, I like a good pork chop once in a while. Whether that’s grilled, oven baked, or some other alternative. I know fried pork chops are a thing somewhere out there. Probably next to the deep fried Twinkie stand at your local state fair. It seems like almost everything gets deep fried these days.

I put these center cut pork chops in the oven at 400 for 20 minutes instead of the grill. I know that they probably aren’t as good that way, but it’s a little easier. Instead of just using aluminum foil on the baking tray, I put parchment paper down as well. I’m not sure whether that makes a difference. I started doing it a few years ago though and something about it seems better. They probably only needed 16-17 minutes since they were about 170 degrees when the buzzer went off, so that’s noted for next time.

For every 4 oz’s of these, you’ll be looking at 160 calories. I was actually expecting a little bit more fat in these, but they look like fairly lean. You’ll get 11% of your daily saturated fat and 8% of your daily total fat in these. There’s about a quarter of your daily cholesterol at 22% here. Not much sodium, I was also expecting some more of that than we’re seeing here on the label.

Lastly (before vitamins/minerals) you get 24 grams of protein per serving. That’s a pretty solid chunk of it right there!

Not much to say here with ingredients. I mean, it’s a pork chop. Whatcha see is whatcha get.

I said earlier that I like pork chops. I’m into all of it – steak, chicken, pork, fish, you name it. These looked pretty good in the store since they’re big, heavy, and could be a great summer lunch or dinner. I wouldn’t even be against pork chops and eggs, I know I’ve done that before.

My taste test for these center cut pork chops was almost immediately after I took them out of the oven. After sticking all of them with my ThermoPop (they do actually look like lollipops) I went and cut off a piece of one of the chops.

This may be biased because I put on some random seasoning that I grabbed out of the cabinet, but these were really really good. Juicy, just enough fat, and a good cut of meat. I’ll probably be picking these up again at some point or if I plan to go to a get-together where there’s a grill involved.