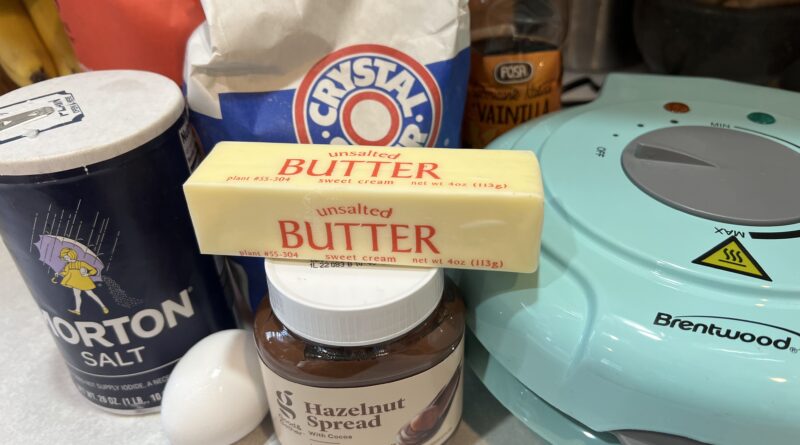 Wafer cookies have always been a good snack (in my opinion). I was actually kind of surprised from looking around the internet that there aren’t really any published recipes on how to make these from scratch. When I say “make,” I literally mean making the wafer parts of the cookie yourself.

Some of the ones out there might use pre-made wafer, but I feel like the average person searching recipes for wafer cookies is hoping to make everything from scratch. So that’s what we’re gonna do!

Step 1 for making wafer cookies: get your butter out with a little bowl.

My butter was still a little too firm, so, I grabbed a bowl and just put it in the microwave.

Microwave that butter for about 30 seconds. It was pretty liquid for me, so, consider 15-20 seconds as an alternative.

Once that’s out of there, you can let it sit for a minute. As I said, you really just need a softened stick of butter for wafer cookies, but more liquid works, too.

Next, grab a big mixing bowl.

Pour the butter into the big bowl.

Once that’s in there for the wafer cookies, grab an egg for your b-vitamins.

Crack the egg into the bowl and then grab your salt and measuring spoons.

Measure out 1/8 teaspoon of salt and dump it into the big bowl.

Once that’s in the big bowl, dump in 1 teaspoon of vanilla extract for the wafer cookies.

Following that, grab your bag of sugar. Granulated, not stirred.

Then, get your flour for the wafer cookies and put 3/4 cup of it into the large mixing bowl.

Using a wooden spoon, mix all of that around so it looks like the dough in the large bowl below.

Following that, get a waffle cone iron and start heating it up. These wafer cookies will be best on the MID setting of the iron. The one I bought was pretty inexpensive on Amazon. The nice thing is that in the future I’ll be able to make stuff like homemade waffle cones, so I’m pretty happy with the purchase.

While that’s heating, grab some nonstick spray. I only did one coating for all of the wafer cookies that I made. You could do more, I guess, but none of my wafers stuck so it must have been enough.

Once it’s heated up, put 1 tablespoon of dough on to the iron for the wafer cookies.

Let each tablespoon of dough cook for about 1 minute for each wafer. Once it’s done, use a spatula or tongs to remove it. I used a mini tongs. In hindsight, I’d go with the spatch.

Here’s a shot of a different wafer being removed:

Take each large wafer, put it on a medium to large sized plate, and cut it up into 4 rectangular pieces.

You can also find some rectangular cookie cutters on Amazon and use those for making perfect angles. My cookies didn’t exactly look like they came from the Keebler elf tree, but yea.

Following that, get your hazelnut spread. Let’s be honest and just call it knockoff Nutella.

Anyways, once you’ve got that, start dabbing some on all but one of the wafers on your plate. Each of these cookies is made up of 4 levels of wafer. You could put some on the underside of the top wafer, but I didn’t.

Consider letting the wafers cool for at least a minute, too, after they come off the iron so they can harden a bit. They should get cool enough while you add the filling to each piece.

Once there’s a bit of hazelnut spread on each wafer, stack them on top of each other.

Repeat the process of putting 1 tablespoon of dough on to the iron and then putting together the wafer cookies until all the dough runs out. Be careful, since the iron will be hot.

Did you make the wafer cookies? Leave a review and let other people know if there’s better ways to do it!