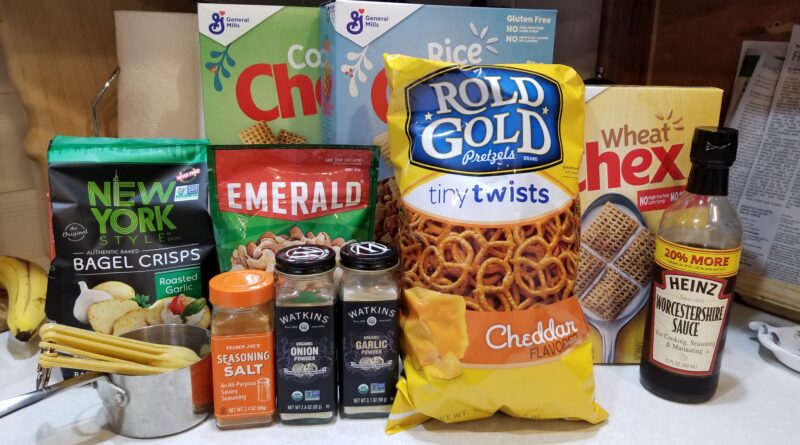 Chex Mix Recipes are easier than you think. Unless you think that all you need to do is throw together a bunch of stuff and shake it around, then this might be more complicated. To really get the seasoning into the mixture, baking it is the way to go (in my opinion). Until making this and researching a bunch of other recipes on the internet, I never realized that so many ingredients went into a Chex Mix recipe.

You’ve got three different kinds of Chex cereal, mixed nuts, and even more on top of that. Plus, a bunch of seasonings. Pull a recipe like this off and you’ll have plenty to snack on for the week.

Grab a big bowl. You’ll actually need a bigger one than what I’m using in this. Consider grabbing one that’s 1.5x or 2x the sized of the one pictured.

After that, get your Wheat Chex.

Grab your measuring cup, too. I never realized how many different kinds of Chex cereal there were. There’s a couple others like chocolate flavored as well.

Measure out one cup of that for this Chex Mix recipe.

Dump that into the mixing bowl.

Measure out another cup of that.

Dump it into the bowl with the first one.

Measure out a third cup of cereal for this Chex Mix recipe.

Dump that one into your mixing bowl.

Following that, get your Rice Chex box.

Same deal, you’ll need to measure out three cups of Rice Chex for the Chex Mix Recipe, so get your 1 cup.

Measure out one cup of the Rice Chex.

Dump that into the mixing bowl.

Wouldn’t hurt to mix it around a little. Measure out a second cup.

Pour that in there.

Measure out a third.

Pour that third one in there. This was about the time I started to realize that it was getting a little full.

You should have something that looks a little like the picture below.

Go and find a spatula to mix this…Chex Mix recipe.

Do your best to mix it around a few times so everything’s evenly distributed.

After that, go grab your Corn Chex. Didn’t even know this cereal existed till I decided to make a Chex Mix recipe.

This might sound familiar, but grab your 1 cup measuring cup.

Fill that up with some Corn Chex.

Next, pour your first cup of Corn Chex into the mixing bowl.

Now it’s really starting to fill up. Next, measure out a little more of that into a second cup.

Pour that into your mixing bowl, too.

Wouldn’t hurt to mix things around a bit right now. Things will probably get crowded by now if you’re using the type of bowl I did. Do your best not to spill any out of the bowl. Fill up a third after that.

Pour that into the bowl.

Do your best to stir things around for this Chex Mix recipe.

It should look like the bowl below or something close. It’s probably not the end of the world if everything’s not perfectly spread around, but do what you can.

Once that’s all mixed up, grab your nuts. In my case, the whole bag was about a cup, so they all went in.

I still measured them.

Dump the mixed nuts into the big mixing bowl with everything else for this Chex Mix Recipe.

Mix everything around in there.

Then, get your seasoning salt.

Measure out 1 teaspoon of seasoning salt.

Dump that into the big bowl.

Mix it around a bit or grab the grab the garlic powder so you can get some of that flavor into this Chex Mix recipe.

Measure out 3/4 teaspoons of that. I only had a 1/4 tsp measuring spoon.

Dump it into the other stuff already in the bowl.

Measure out the rest to dump in.

Get it in there with the rest of the garlic powder and seasoning salt.

Go and get your onion powder. We’re really seasoning things up now!

Measure out a half teaspoon of the onion powder for this Chex Mix Recipe. Don’t want it to be too onion-y.

Dump that into the mix.

Stir things around a little bit.

At this point, you might be spilling stuff over the sides of the bowl if you’ve got one like I had. Do your best not to spill or just clean the counter before starting so you can scoop things up and dump them back in there if they spill out. In my case, I have a dog that likes to lick the counter, so I actually had to make sure it was clean. Once that’s mixed, get your bite-sized pretzels.

Measure out a cup of those for this Chex Mix recipe

Dump them into the mixing bowl with everything else.

As you can see, mine’s almost spilling out at this point. After that, get your garlic flavored bagel crisps.

Take those and measure out 1 cup of them as best you can for this Chex Mix recipe. They might be pretty big, don’t worry if it’s not an exact cup.

Dump those into the bowl, too.

You can also break them up into smaller pieces.

Then, grab a pot that can go in the oven. It doesn’t have to be one that’s as big as what I used, but just something that you can put butter in to melt.

Take your butter and measure out 6 tablespoons of that. I used another stick to fill in the missing tablespoon.

Put the butter into the pot and grab your Worcestershire sauce. I’m almost positive mine was way past the use-by date, but that was too smudged to read so I told myself it was fine.

Measure out two tablespoons of Worcestershire sauce and dump them into the pot with your butter.

You could probably just microwave the butter and then add the sauce after it’s melted, but I didn’t realize how much of a pain it would be to try mixing all the cereal in this small pot later on. You’ll see what I mean. Don’t forget the second tablespoon of it.

Put that in the oven for 7-10 minutes so all the butter (or most of it) melts.

I thought 5 minutes would be enough for me, but it only melted about half the butter.

As you can see, mine needed more time to melt for this Chex Mix recipe.

At this point, take your bowl (my overflowing bowl in this case) and start scooping it into the pot. You could also skip this step and start loading everything on to a baking sheet instead, which is what I ended up doing anyway.

If you can find a big enough pot, good for you.

Once it’s all in there, put the mixture in the oven for an hour and stir every 20 minutes. Or, line a baking sheet with aluminum foil and then parchment paper over the foil. Then, dump all the mixture on there and bake for an hour/stirring every 20.

The baking sheet approach is probably better than the pot thing.

At about the 20-minute mark, take it out and stir it around so the seasonings/sauce bake into it evenly.

Then, put it back in. Picture below is of the second stirring.

Put it back in a third time for the last few minutes.

It shouldn’t get burnt or anything at 250. Once it’s done, take it out and let it cool on the stove.

After you’re done making this Chex Mix recipe, store it in a zip lock bag or tightly sealed plastic container.