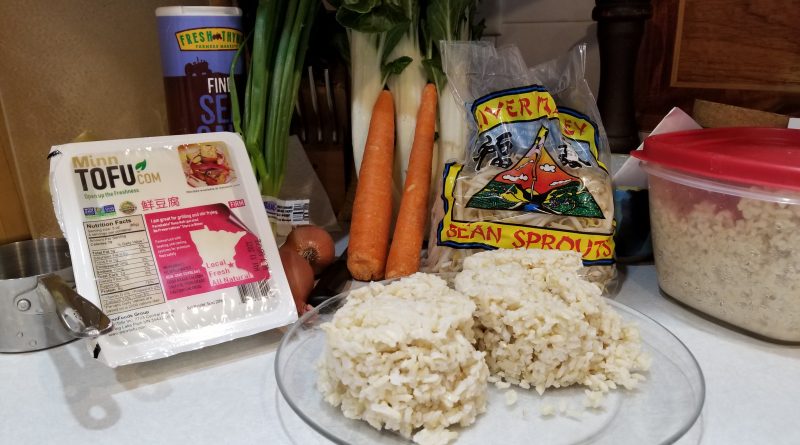 Fried Rice Recipes can vary a lot and include a bunch of different ingredients. This one includes a handful of different vegetables along with various seasonings. Overall, it should be pretty simple for you to make. It might take a while, though, for all the prep work chopping everything. This is best started the previous day so the rice can sit in the fridge overnight. This is an awesome side dish or even a main course that you could have for dinner.

What You’ll Need to Make This Fried Rice Recipe

You can also add things like meat or seafood to this fried rice recipe. I really like chicken or shrimp fried rice myself. Let’s start off this recipe with step 1, getting the rice prepped the night before. I cooked mine with an Instant Pot.

Even though there was way too much pressure in it and I’m pretty sure my kitchen almost blew up, I survived and so can you. Seriously though, be really careful with pressure cookers or this might happen:

Anyways, on to the fried rice recipe. Get some rice, I used brown.

Get something to cook it with. As I mentioned, I used an Instant Pot

Once that’s done cooking (shouldn’t take too long, either) you’ll need to take it and put it in a container for the fridge.

Stick the rice in the fridge overnight and let it get hard. Not so hard that it’s got the consistency of uncooked rice, but ya know, somewhere in the middle.

The next day, it should be ready to go.

Grab a cutting board so you can chop up the tofu. You’ll be using this a lot during the fried rice recipe. Then, grab your tofu.

Throw it on the cutting board and start slicing the tofu up for this fried rice recipe.

Once you’ve cut it into a few big chunks, cut those chunks again into thinner ones. Then, get your cooking oil.

Grab the measuring spoons, too.

Put 2 or 3 tablespoons of cooking oil (I used canola) in your frying pan.

Set the pan on medium-low heat and put 5 ounces of sliced up tofu in there. Give each side 4-6 minutes to get crispy.

I know it looks like a bunch of pats of butter, but I promise those are chunks of tofu for this fried rice recipe.

As you can see, mine were varied in terms of actually getting done and crispy. Some of them got stuck to the pan and those parts got ripped off when I took them out, so that’s why it looks like some aren’t done at all. Set that plate with them aside for the time being and grab your carrots.

Before cutting them up, make sure to wash them so they aren’t dirty.

Chop them up into pretty small pieces.

You can always use more or less of the veggies in this. Next, get the scallions.

When I said 6 of them, I really meant about 6 of the long green parts, so in my case it was only 4 of them counting the white ends.

Chop off the white parts and get rid of those.

Then, chop up the green parts into little pieces and throw them in a bowl with the carrots.

Grab your shallots next. I bought a couple of them but realized that I really only needed the bigger one.

Throw the chopped-up shallots into the bowl of the other veggies.

After that, get the kitchen scale to measure out 3 ounces of bean sprouts.

Also, grab the bean sprouts for this fried rice recipe

These should be refrigerated before and after.

Measure out 3 ounces of those and then grab a strainer basket.

Set them on the plate with the tofu.

Put that aside, I set mine on the toaster.

Next, get your onion. It’s probably better if you use a small one. I only cut off a small part of this one.

Get your knife and cutting board for this fried rice recipe. Cut through the onion and get rid of any gross parts that are black.

Yea, I had a lot of onion left over after that. Anyway, finely chop it up into little pieces.

Add it to the plate with the bean sprouts and tofu.

Set that aside again and grab your bok choy. Again, I probably over-did it with buying as much as I did, but oh well. Cut off one stalk of that.

Just cut off one of the stalks and then wash it.

Wash the bok choy. Mine had a lot of dirt and weird looking stuff on it so I wanted to wash it before I started cutting.

Take the bok choy and chop the bottom part off. Then, chop the leaf part off, too, so you can cut that up separately.

Next, throw your bok choy into the bowl.

Then, cut up the leaves and throw those in the bowl, too.

After that, get your tablespoon measuring spoon again.

Put two or three tablespoons of canola oil into the pan.

Then, throw the rice into the pan on medium-high heat.

Get it all in there for this fried rice recipe.

Use your spatula to move the rice around. Even if you’re using a lot of cooking oil, some rice can still get stuck in the pan.

After that, grab the vegetables and throw them into the rice.

Mix all of that around really well and then grab the large egg.

You’ll just be cracking that into the rice, nothing fancy here. After that’s been mixed in, get a tablespoon of soy sauce to throw in there.

Next, throw in a pinch of salt. You’re safe going up to about a teaspoon, but remember, there’s sodium in the soy sauce

After the salt’s in there, throw in the tofu, onions, and bean sprouts.

Mix all that around really well.

Lastly, throw some pepper in there. You really just need one or two shakes of that.

Check out that fried rice. There’s two meatballs in there as well from a recipe I did the other day.

Did you make this fried rice recipe? Let me know with a review and any tips to make it better?