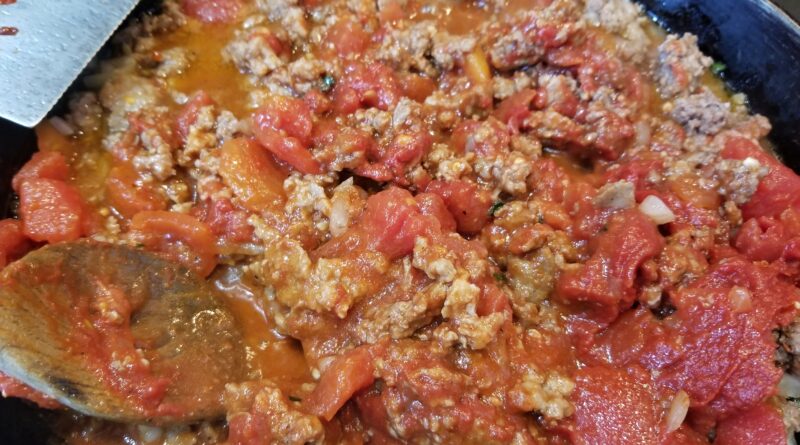 Spaghetti Sauce Recipes aren’t as complicated as you think. You can get a really tasty sauce made in under 45 minutes and have your house smell like an Italian Grandma’s kitchen for the rest of the night (speaking from experience, it’s a good smell!). There’s about 15 minutes of prep work and then another 15 minutes of letting it simmer in a skillet.

You could start your noodles on another burner about halfway through make this so both get done at the same time. It wouldn’t hurt to make those first, either.

You’ll need the usual stuff you’d find in the kitchen to make this spaghetti sauce recipe.

What You’ll Need to Make It

Get your skillet and set it on a burner.

Following that, get your hot Italian sausage

Measure out 1/2 a pound of that and throw it in the skillet. Since there was exactly half a pound in the container, I just cut it in half and threw that in.

After that’s in the skillet (which should be on the lowest heat), get your ground beef.

Grab your kitchen scale for this part of the spaghetti sauce recipe.

Measure out 1/2 a pound of ground beef. I wanted to avoid getting any on the glass part of my scale, so I used a plastic container.

Throw those in the skillet, too.

Break them up with the spatula and work the meat around a little bit. There should be plenty of fat from the Italian sausage to keep things lubricated in the pan, but, you could always throw some butter or olive oil in there, too.

Once the meat’s spread around, let it cook a bit. You should turn the heat up now to medium-high if you haven’t already. It should only take 8-10 minutes for the meat to actually get cooked for this spaghetti sauce recipe.

After that, get a cutting board and kitchen knife for cutting up the onion.

Grab an onion. The one I used was probably too big since all you’ll need is a half cup of it diced.

Peel it and then get ready to chop it up for this spaghetti sauce recipe.

Chop it even more than in the picture above, then fill up the 1/2 cup measuring cup with it.

Next, get your basil leaves.

Chop up enough of those for a teaspoon.

Next, load up 1 teaspoon.

Dump that in with your onion.

Next, get your minced garlic. You could also chop up two cloves.

Measure out 1.5 teaspoons of minced garlic.

Add that to the onion and basil mixture.

After that, dump all of those things into the meat.

Mix it all around with a wooden spoon (or any spoon works too) for this spaghetti sauce recipe.

Once that’s out of the way, take your measuring spoons again and get ready to use those.

Dump that into the skillet.

Stir all that around.

I know that this doesn’t really look like a spaghetti sauce recipe so far but bear with me.

Next, get your sea salt.

Measure out half a teaspoon of that.

Once you’ve measure out half a teaspoon of salt, throw that into the skillet.

Mix that around and then get your can opener.

Grab a can of diced tomatoes for this spaghetti sauce recipe.

Get that can open. My can opener has some serious mileage on it.

Once it’s open, dump it into the skillet.

You may want to drain the liquid from it first in the sink. I kept it in, but ultimately decided that I would’ve been better off draining it.

Then, grab the tomato paste. I figured all I’d need was tomatoes, but you gotta get the paste in there, too.

Open it up with the can opener for this spaghetti sauce recipe. We’re in the home stretch now!

Dump 6 ounces of that in the skillet.

Stir it around really well once it’s all in there.

Stir that really well for this spaghetti sauce recipe. Then, last but not least, get your sugar.

Measure out 1 teaspoon of that.

Dump it into your skillet and mix everything around really well.

Once all of that’s in and mixed around really well for this spaghetti sauce recipe, you need to bring the skillet to a boil for a few seconds and keep stirring it. Then, lower the heat all the way down and let it simmer for 15 minutes. Stir consistently while all that’s happening.