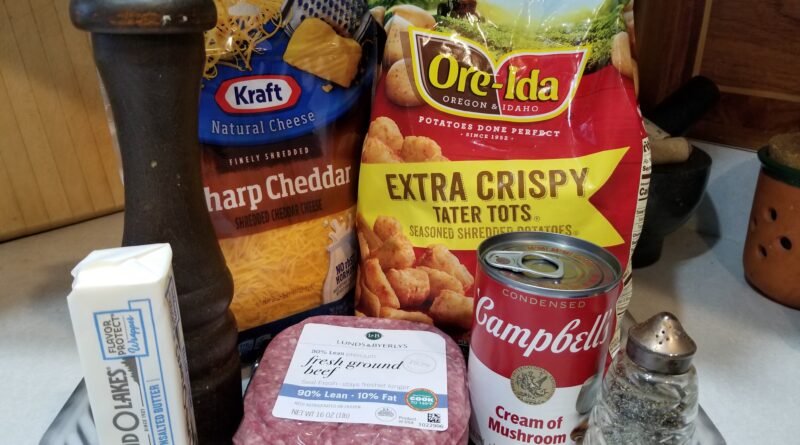 Tater tot casserole is pretty popular in the heartland states, especially Minnesota and Wisconsin. It’s filling and works for feeding a big group of people. I’m keeping things pretty basic with this one, but feel free to throw other stuff in like chopped onions or rosemary. The calorie info below is an estimate based on everything that’s in the ingredients. It’s probably not perfect but should be close.

Click Here to Jump to Notecard Version of Recipe

What You’ll Need to Make This Tater Tot Casserole

Let’s make this tater tot casserole. To start off, grab your skillet.

Put that on medium heat.

Grab the spatula. I really like using a metal one because plastic tends to melt over time.

Grab 1/2 tablespoon of butter for making this part of the tater tot casserole. You might not need it because of the ground beef fat, but I felt like it would add to the flavor.

Following that, throw your butter in the skillet and move it around a little bit.

Then, grab your ground beef. You can get away with using 85 or 80% lean instead, although the fat content in the meal overall will get pretty high if you do.

Throw that into the skillet.

Break it up with the spatula. Ideally, the meat will be in pretty small pieces once you’re putting it in the baking dish for the tater tot casserole.

Keep working it around in the pan and continue to do that so it gets evenly browned. You don’t need to cook the meat all the way through, but at least browning it is important. It will have plenty of time to get completely cooked in the oven. Then, grab some pepper.

Add a little bit of pepper to the tater tot casserole meat, just enough to taste.

Stir that around a bit and then grab the salt.

Throw in a pinch of salt and move the meat around some more.

Move the ground beef around in the skillet. I probably cooked mine another 1-2 minutes after the picture below was taken for the tater tot casserole.

Once the burner for your meat is off, grab some Campbell’s condensed cream of mushroom soup.

You might need a can opener if yours doesn’t have a tab on top, but, mine did so I could just open it by hand. Once it’s open, dump all of that into the ground beef. This is what gives the tater tot casserole its creamy flavor.

I know that not everybody’s a fan of condensed, but I personally like it.

Make sure you get everything out of the can. I used a butter knife to really scrape it out of there.

Take the spatula and make sure to move things around pretty well in there.

Make sure it really spreads out for this tater tot casserole.

It’ll take about the time to preheat as it will for you to get the tater tot casserole ready to go in the oven.

Grab a glass baking dish so you can pour the skillet mixture into it.

Spread that out really well, it’s the base for this tater tot casserole.

I used my spatula to press it down around the dish so it got evenly spread out.

Once that’s taken care of, grab the sharp cheddar.

Get your measuring cup, too.

Dump that in for the tater tot casserole. The cheese really helps to hold the tots down.

Get the second one measured out, too.

Dump it in. One interesting thing that I noticed was that my specific bag of cheese was actually 2 cups exactly (weight wise) but both the cups I measured looked pretty full. You may want to consider using a kitchen scale.

Make sure it gets spread around evenly.

Now that all your cheese is in, grab the most important thing for making tater tot casserole.

I went with extra crispy and it turned out really good that way.

You may or may not have enough tots to completely cover the cheese. Sorry about the blurry picture right here, not sure what happened.

Put those in the oven once it’s preheated to 400F.

Bake the tater tot casserole for 30 minutes at 450 F

Carefully take it out of the oven.

There you have it! A finished tater tot casserole. Give it a little while to cool down and definitely don’t reach in and start trying to eat any.

Did You Make This Tater Tot Casserole? Leave a review and any tips to make it better!