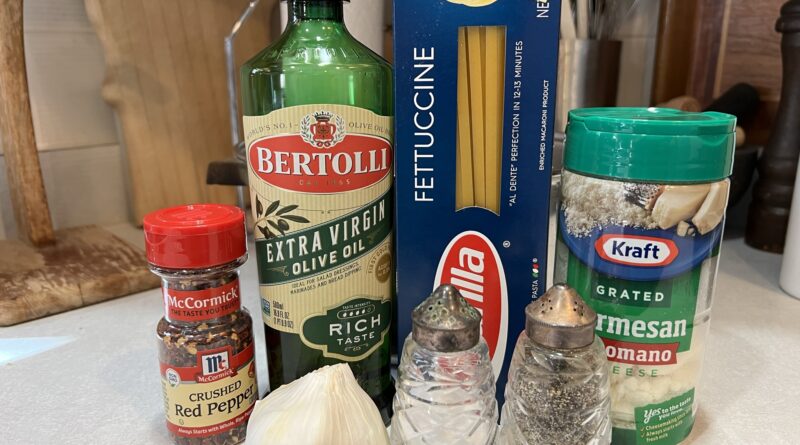 Tagliolini is really just a fancy word for fettuccine, if you can believe that. I think saying the other one is actually easier, so it’s probably why people call it that. It’s a flat, ribbon pasta that’s popular in a handful of dishes.

This tagliolini recipe that I’m making here is pretty simple. I know that a common version of this pasta is with alfredo sauce, but I made a basic recipe out of olive oil and a couple other things here.

To kick things off, grab your cutting board.

Then, get your garlic. You’ll only need a few cloves, depending on how big yours is.

Start working on the clove. You’ll also need a kitchen knife for this part of the tagliolini recipe.

Following that, find three cloves and remove the outer skin.

Chopping them up might take a minute or two with that knife. The picture below wasn’t my final product, I worked on them a lot more to really get the garlic into tiny pieces. Consider using pre-minced garlic for your tagliolini, too.

Then, fill up a large pot about half way with water and put it on the stove at high heat.

While the pot of water is heating up, grab the large mixing bowl.

Dump your minced garlic into there.

Once that’s in there for the tagliolini, grab your crushed red pepper and some measuring spoons.

Measure out 1.5 teaspoons of that and throw it into the big bowl.

Once that’s done, grab your parmesan & romano for this part of the tagliolini recipe.

Measure out 3/4 cup of shaved cheese and dump that into the bowl, too.

Once that’s in there, get the Pyrex measuring cup.

You’ll also need your olive oil for this part of the tagliolini recipe.

Measure out 1/3 cup of olive oil into the measuring cup and set that aside for a little while.

By now, your water should be boiling. Grab your tagliolini noodles and put them into the pot to boil.

Boil them in there for about 12 minutes. That’s kind of the standard when it comes to boiling noodles. You can also turn down the heat to medium for that time.

Remember to stir the pasta periodically while it’s in there.

Then, add some pepper to the seasoning mixture in the large bowl.

Following the pepper, put some salt into the big bowl.

Now that you’ve added the salt, grab a colander and put it in the sink.

You’ll need to wait a few more minutes for the pasta to finish cooking. Once the time’s up, drain the pasta in your colander.

After the tagliolini is drained, dump it into a large serving bowl.

Following that, grab the olive oil in the measuring cup and dump it into the large bowl.

Then, get the rest of the pasta and start working on that.

Once you’ve got that mixed around pretty well, dump the mixture from the big bowl into your tagliolini.

Mix things around some more in there and should end up with something like what we’ve got below here:

There ya go! Some delicious tagliolini or fettuccine as it’s more commonly known. Makes for a great weeknight meal to feed your family, roommates, or whoever.

Notecard Version of the Tagliolini Recipe

Did You Make It? Let other readers know what you think and if there’s any way to make it better!