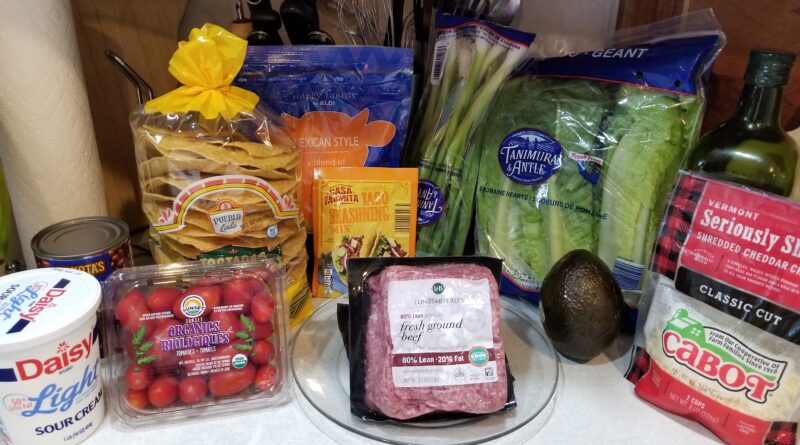 Taco Salad Recipes are great in the spring, summer and fall seasons. They aren’t too difficult to cook up for dinner, either. You pretty much just need to cook up the meat and throw everything else together in a bowl, but I’ll be doing a step-by-step of this.

What You’ll Need to Make This Taco Salad Recipe

Let’s make this taco salad recipe. To get things started, grab your olive oil. Yea, I know. Weird thing to have for a recipe like this. But don’t worry! It’s just going in the pan so the beef doesn’t stick too much.

Grab the measuring spoons, too.

Throw the cast iron skillet on the stove.

Measure out some of that olive oil.

Measure out half a tablespoon of the olive oil. Alternatively, you could use butter, too. Then, set the skillet to medium heat.

Dump the olive oil in there for the taco salad recipe.

Make sure to work the skillet around a little bit so the oil coats the entire pan. Then, get the first pound of ground beef out.

Grab a spatula, too. My metal one worked pretty well for this taco salad recipe.

Throw the ground beef in the pan. Move it around with the spatula, making sure all of it cooks well.

While that’s going, grab some salt. You don’t need to throw too much in, just sprinkle a little bit on top of the meat.

Move the meat around periodically with the spatula. Once the first pound is done cooking, put it on a plate off to the side. Then, throw the second pound of ground beef in there for this taco salad recipe.

Measure out 1 teaspoon and throw it into the skillet with the ground beef, mixing all that around.

I sort of messed this up since I should have seasoned the first pound while it was cooking. If you’ve been following along at this point, finish cooking the second pound of ground beef for this taco salad recipe and then throw the first pound (on that plate) back into the skillet.

Put in the other teaspoon of seasoning and mix everything around really well. We’ll be adding a little more seasoning later on. Once that seasoning is mixed in, cover the skillet and set it off to the side. Then, grab your green onions.

You’ll need to chop these up, so grab a cutting board and a kitchen knife for this part of the taco salad recipe.

Then, grab a 1/4 cup measuring cup. I really needed a half cup, but scooping up two of these worked, too.

Measure out two of those 1/4 cups of green onions and dump them into the big bowl for mixing.

Following that, get your large avocado on the board so you can cut it up. Nothing like some healthy fats in your meal!

Make sure you also cut out any black or extra mushy non-green parts of it, too.

Once that’s all taken care of, throw the avocado into the big bowl, too. Then, grab the lettuce. You’ll be good with about 8 ounces of it in there.

Wash all of your lettuce (unless it’s pre-washed).

Throw it on the cutting board. It’s best to get a paper towel and try to dry off the lettuce as best you can. Nobody likes a soggy taco salad recipe!

Once the lettuce is all taken care of, throw it into the bowl with the avocado.

Then, get your cheese so you can throw some of that in.

Throw a cup of the sharp cheddar in the big bowl.

Then, throw 1 cup of the Mexican style blend into the big bowl. Once that’s done, grab your cherry tomatoes so you get some lycopene with the meal. I think that’s how it’s spelled.

Measure out 1 cup of those.

Then, dump those into the mesh strainer and wash them.

Once washed, dry them off as well.

Slice them in half on the cutting board for this taco salad recipe.

Once those are all cut up, throw them into the bowl with the other ingredients. It’s really coming together now!

Once those are in there, then get your salsa for this taco salad recipe. Any salsa works, ours was actually homemade, too (hence the mason jar).

Scoop out 1/3 cup of salsa into the big bowl with everything else.

Mix all that around really well for this taco salad recipe. Then, get your sour cream out.

Scoop 1/3 of the sour cream out and throw it into the big bowl, too.

Mix all that around really well. I know that it’s getting a little repetitive but this taco salad recipe is pretty much throwing the ingredients in and mixing them around.

At this point, dump another tablespoon or two of the taco seasoning into the bowl and mix some more.

Then, find the skillet with meat in it and dump that into the bowl with the salad. This part of the taco salad recipe might get a little tricky just because of spilling ground beef. Do your best to get it in there without losing too much on the counter.

You know the drill. Stir it around and all that good stuff.

Once that’s all stirred around, grab a big serving plate.

Then, grab your bag of tostadas for this taco salad recipe.

Start arranging those on the serving plate so they cover the entire thing.

They’re like giant chips aren’t they? Anyway, next, get your can of beans.

You’ll also need a can opener.

Open the can of beans and throw that into the bowl, mix it around some more and then spoon all of that out evenly on the plate with the tostadas. Now you’re done with the taco salad recipe!

Did You Make This Taco Salad Recipe? Leave a review and let other people know if there are ways to make it better!