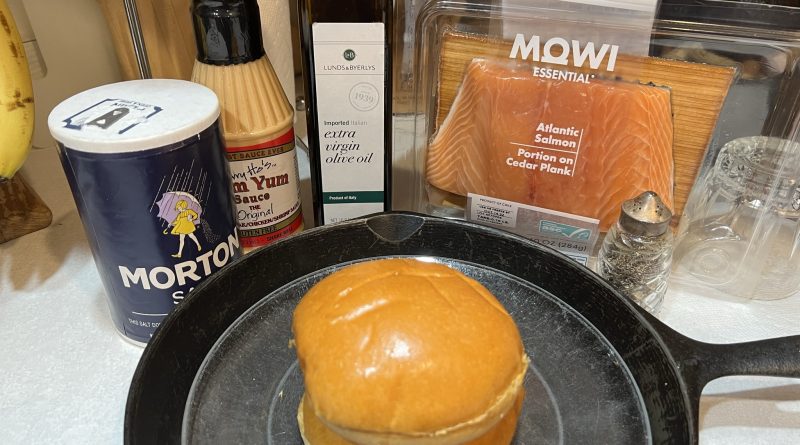 Salmon recipes don’t have to be so complicated.

While marinating meat and fish the day before creates some awesome flavors, sometimes you just don’t have the time. That’s why this salmon recipe is really straightforward, simple, and easy to make in about 20 minutes or less. No running around for a million ingredients, either.

Let’s make this salmon recipe. The first thing you need to do is grab your salmon. You don’t really need one with a cedar plank.

If you do have a plank, though, you can always soak it for a little while prior to cooking. Mine isn’t pictured soaking because I ended up cooking it in a skillet instead of on the grill, but, I did put it in some water for a little while.

Grab a plate to put the salmon on.

Set it on the plate for this part of the salmon recipe.

Get your olive oil to put some on the salmon.

Use at least 1 tablespoon of olive oil, maybe 2 to prep the salmon for cooking.

Once that’s rubbed evenly on the salmon, grab some salt for this part of the salmon recipe.

Shake a little bit on the fish, not a ton but just enough to taste.

After that, add some pepper to the salmon, just to taste.

This next part of the recipe might get a little controversial, mainly because many out there say not to cut the skin off prior to cooking.

It worked pretty well for me to cut it off since I was using a skillet. But, if I was grilling it (on a plank or not) or baking it, I would definitely leave the skin on.

That being said, grab a knife.

Pick up your fish for this part of the salmon recipe and find where the skin ends.

Cut the skin from the salmon.

Do your best to cut the skin off the salmon. Once that’s done, cut the salmon in half, too.

Grab a mesh strainer for this part of the salmon recipe. Personally, I really like spinach, but regular lettuce also works great for this.

Place spinach in the mesh strainer and start rinsing it off.

Once that spinach is cleaned up, you can leave it in there or put it in some paper towels to dry off.

Then, get your skillet.

You’ll also need a spatula for this part of the salmon recipe.

Turn your skillet up to medium heat.

Add about a tablespoon of olive oil to the skillet.

You might need a little more or less. Once that’s in there, grab the fish for this part of the salmon recipe.

Once both of the fillets are in the skillet, put a saucepan lid over the skillet. I probably could’ve used a bigger lid.

Do that for the first half of cooking the fish for this salmon recipe. It will be about 4 minutes, so here’s a 4-minute timer for you:

Once that’s done, open the lid and flip the salmon, cooking it for 3 minutes on the other side. Here’s a 3-minute timer:

After the salmon is done cooking, place it on a plate off to the side and grab the buns with some Yum Yum Sauce.

After that, spread some of the Yum Yum sauce on the bun with a butter knife.

This sauce is great with many salmon recipes, but it also goes well with other stuff, too.

Load up both buns with the sauce and spinach, then, grab your salmon and place one on each bun.

There you have it – a salmon recipe for two people! Here’s the fast version:

Did you make the salmon recipe? Let other readers know what you think and any ways to make it better below!