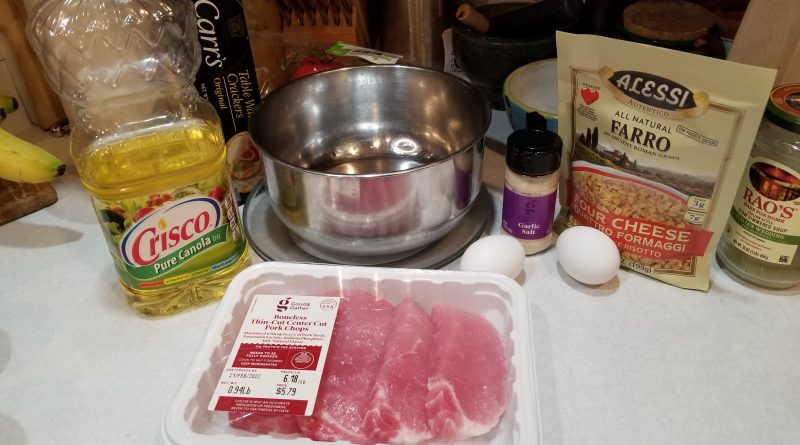 Pork chop recipe is getting thrown together in my kitchen for this one. We’re going to be making the main part of the dish (the chops) and also cooking up some sides of broccoli and farrow. It’s a great option if you normally eat a lot of chicken or beef and want to change things up. This meal serves 4.

Here’s what you’ll need to make this tasty recipe:

As I mentioned, this is pretty straightforward and simple to make. You’ll want to start by preheating your oven to 375 and cracking your eggs into a big bowl like this:

Then, whisk the eggs well for about 30 seconds or so until you’ve got what looks like the beginnings of an omelet in there. Next, get your garlic salt.

Put a 1/2 teaspoon of the garlic salt into the egg mixture. You can use other things like garlic powder and salt separately, but the amounts that you use will be different. The other thing that you will want to do is make sure to use less of those two ingredients if you go with adding them separately. 1/4 teaspoon for each would probably be appropriate for this pork chop recipe, since it would be overly salty/garlicky otherwise.

Next, it’s time to pour that out on a plate

Pour the beaten eggs and their seasoning out on to the plate like in the picture. Next, load up the second plate with a bunch of crackers.

Smash the crackers up as best you can. I just used my hands, but, you could do other things to break them up for the pork chop recipe.

Now, it’s time to grab your baking sheet and line it with aluminum foil. Then, put the parchment paper over the aluminum foil. Set this aside for now but keep it near the plates of cracker/egg mix since you’ll need it soon.

It’s time to grab your skillet, set it to medium-high heat, and put 3 tablespoons of cooking oil in there. You’ll need to move kind of fast at this point so the oil doesn’t all burn up before you can use it. Next for this pork chop recipe, go grab the chops themselves.

Careful not to spill egg on the counter. Once each pork chop has the cracker breading all over it, you will be setting it into the skillet to be browned. Do your best to get all the pork chops breaded and into the skillet one after another so they brown evenly. Each side should be about 2-3 minutes.

Pork chop recipe in the skillet

I know that I have a bigger skillet somewhere, so I could’ve used it to fit everything in at once. It’s not the end of the world if you only brown a few of them at a time, though.

Once each chop has been properly browned, go put it on the parchment paper-lined baking sheet. Once they’re all browned, put it into the oven for 35 minutes.

The time may vary depending on your oven, so, don’t be afraid to check the temperature of the meat after 25 minutes. In my oven, the chops were kind of overdone when I cooked ’em for 40 minutes. Turn them halfway through cooking, too.

If you feel like it, you can make a little omelet since the skillet will still be hot and there will be egg left over from the breading part of the pork chop recipe.

It tasted okay, and it’s something to do before you need to get your rice cooking. Once the oven is at 30 minutes, it’s time to start cooking your rice so it will be done in time.

I used some four cheese quattro formaggi because it sounded incredible. It did taste pretty good since there were a handful of different seasonings in there.

The farrow is pretty easy to cook, so you shouldn’t have too much trouble with it.

I might have used a little too much water in mine since I needed to turn up the heat quite a bit at the end for it to finish in time. Next, it’s time for the broccoli that you’ll have as a side dish to this pork chop recipe.

Get that broccoli. Yea.

Mine had some big stems, so, there was a lot of chopping involved. You need cut the broccoli stems for this pork chop recipe because those really don’t taste too great. After those are cut, wash off the broccoli. You may want to wash them a little bit at a time instead of all at once.

Next, put your broccoli in a bowl or some other container that you can use to microwave it in. I ended up trying to microwave all of it at once, not a good idea. As long as it’s pretty spread out, you should be okay.

Once the pork chops are done (or you think they are) check each to make sure they are cooked all the way through. Pork should be at least 145 degrees, so mine was pretty hot. Overall, though, it tasted good, which is what counts in my book. That’s why I recommend that for this pork chop recipe, you cook them at 35 minutes to avoid getting them overdone.

This meal is awesome because it’s really filling, nutritious, and it saves you some money that can go toward buying a fancy dessert. Or whatever.