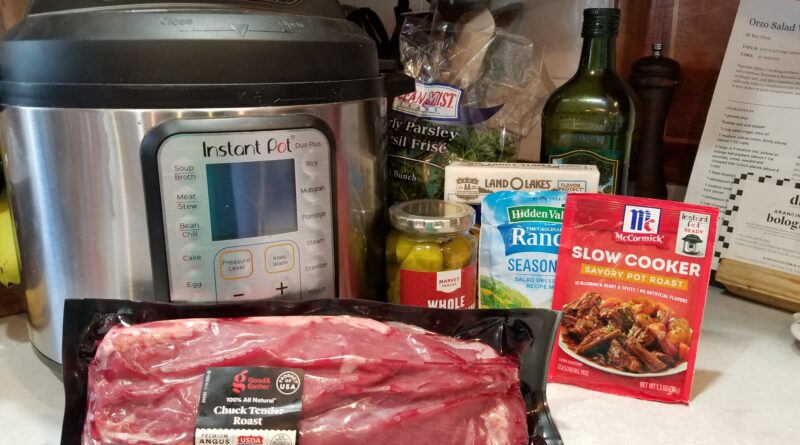 Mississippi pot roasts work great on a cold night or during the summer. Trust me, we just tested trying it in the summer and it was pretty darn good. Follow this recipe and you’ll have an awesome one in about an hour and a half.

You’ll be able to find all the ingredients for this at your local Aldi or other grocery store. Some red wine goes great with this. As a regular person without a crazy budget, I prefer some finely aged Carlo Rossi or Yellow Tail.

What You Need for This Mississippi Pot Roast

Let’s make a Mississippi pot roast. To kick things off, take your meat out. You don’t need to have the exact same amount as me, but something in the 2.5 to 3 pound range will do the trick.

Next, get your Instant Pot out and plug it in.

Grab your olive oil next.

And your measuring spoons.

Measure out 2 tablespoons of olive oil and put them in the Instant Pot.

Set the pot to the sauté setting and leave the lid half off or completely off. It’s really dangerous to press “sauté” with the lid closed and locked. Never do that! Also, make sure there’s no water in the pot or it will start exploding out of the pot and splashing on you. I did that. It wasn’t fun.

While that’s starting to heat up, get back to the meat for this Mississippi pot roast. First, grab a medium sized plate.

Take the meat out of the packaging and put it on there.

This meat for the Mississippi pot roast kind of looks like a giant tongue. Anyways, grab a paper towel so you can get as much moisture off of it as you can.

After that amount of time has passed, use the tongs to flip the meat and sauté the other side for 5 minutes for this Mississippi pot roast.

It almost looks like a little animal in there. Flipping it around might be tough at first. My meat was pretty slippery, so it took a few tries.

Once that’s done, hit cancel to turn off the sauté function.

Next, get your butter for this Mississippi pot roast recipe.

You’ll also need a butter knife so you can spread the butter.

Stick 4 tablespoons of butter (usually half the stick – many have the measurements there) and rub the butter on the top of the meat.

The meat should be hot for this Mississippi pot roast, so the butter should melt pretty quickly.

Once the butter’s all rubbed in, grab your slow cooker savory pot roast seasoning.

You’ll want to sprinkle all of that on the meat for this Mississippi pot roast.

After that, get the ranch seasoning packet. It might seem weird to put this in there, but it’s actually pretty good.

Sprinkle that on top of the meat, make sure it’s distributed well.

Once all that’s in there, get your jar of whole pepperoncini.

Just throw a few of these in (I used about 8 of them).

Mine were a little shriveled.

Next, get your Pyrex

Pour that water into the Instant Pot with everything else.

Following that, close the lid (and lock it) then press Meat/Stew.

Lock the lid so it makes a beeping noise for confirmation.

Make sure the vent is set to “Sealing” like in the picture below.

Following that, set a timer for 45 minutes and let that cook. Next, you’ll be getting everything else together. Grab your Pyrex measuring cup again.

Fill that up with 1 cup of water for the next part of this Mississippi pot roast recipe.

Grab your broth base so this tastes nice and savory.

Dump 2 teaspoons of that into the water and start mixing it around.

That’s what I used when I made this Mississippi pot roast recipe.

After that’s mixed up really well, grab a big pot (I have a Staub).

Then, pour the broth into the pot.

Once it’s poured in there, mix it around with the whisk. Don’t worry if there’s a little bit of clumping, but do your best to really mix it all around.

After that, get your cutting board for this Mississippi Pot Roast recipe. It’s veggie time.

Cut up your veggies with a big knife.

The first ones we’ll be working on are the onions.

Get all the skin peeled and the ends cut off.

Once that’s done, throw those in the pot.

First, wash each one.

Then, grab a potato peeler.

Peel your potatoes as best you can so there isn’t too much skin left on there. There’s something wrong with my peeler so I eventually just grabbed a kitchen knife to finish the job with. Once the meat is done cooking, let it naturally vent for 20 minutes. Once that time’s up, move the valve into the venting position and let that Mississippi pot roast meat vent for 20 minutes.

Following that, grab a wooden spoon.

Put the pot on medium heat with the potatoes, onions, and broth in there and stir everything periodically.

Following that, get a big serving plate out.

Grab the meat from the slow cooker and the pepperoncini and put that on the serving platter.

Next, press the Sauté button (KEEP THE LID OFF) to start heating up the sauce that’s left in the Instant Pot. You need the lid taken off so it won’t explode.

Take that and measure out 1 tablespoon of corn starch.

Dump that into the sauce in the Instant Pot for this Mississippi Pot Roast and then stir it around.

Grab any spoon for this part and mix it around as best as possible. It may clump a little bit.

Next, get an oven mitt. Once the sauce is boiling, turn the heat off.

Dump the Instant Pot into the pot with the veggies in it. This Mississippi pot roast will be pretty darn good.

Next, get some aluminum foil. You could’ve done this part before, too, but now works.

Cover up the meat on the tray to keep the heat in.

Go and grab your carrots. Wash those in a strainer, too.

Once those are cleaned, get them in the pot for this Mississippi pot roast.

Mix all that around. You may want to turn up the heat, too. While that’s still cooking, chop up a handful of parsley for this Mississippi pot roast so you can mix that in for added flavor.

After that, get that big knife and start chopping the meat.

Chop it up really well so there are a lot of pieces. Once the potatoes/veggies are done cooking, load up the platter with those.

Following that, add the parsley and you’ll be ready to pour the wine and eat!

Did You Make the Mississippi Pot Roast? Leave a review and let other people know if there are ways to make it better!