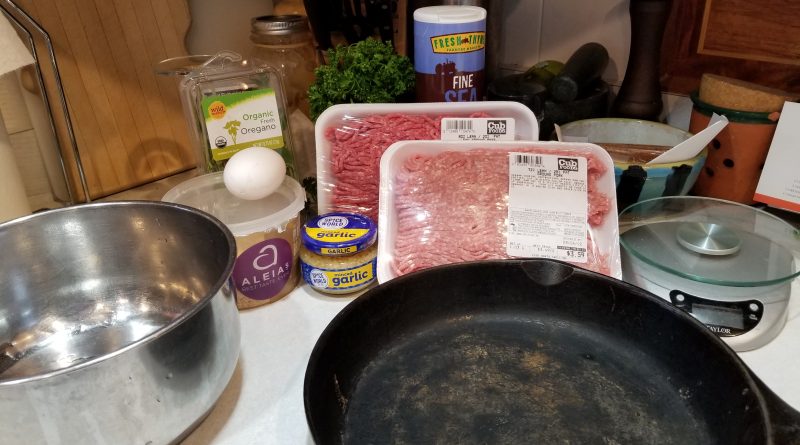 Meatball Recipes are great to have on hand if you make a lot of stuff with pasta or other noodles. I know it’s a lot easier to just buy some pre-made, but it’s actually pretty fun to put these together and you can experiment with adding different types of meats or seasonings.

What You’ll Need to Make This Meatball Recipe

If I made this over again, I might go actually hunt down some veal instead of the meat I used. Technically, true Italian meatballs would use that but it’s way cheaper to go pork/beef. The other thing is that I used a little too much olive oil (2 tbsp’s) in the skillet and so all the meatballs were kind of coated in it when they were done baking.

At the same time, if I threw these into some pasta with red sauce, butter, and cheese, it wouldn’t really matter. The other thing is that I didn’t really use any salt and pepper and that took away from the taste but otherwise these were great.

Let’s get start with step 1 of this meatball recipe. First, grab a big mixing bowl.

Then, grab the ground pork. You don’t have to have the exact same kind, although going extra lean might not be as good.

Throw all of that into the bowl. Unless you don’t want to make as many meatballs.

Next, grab your ground beef for the meatball recipe. This whole process is kind of similar to making meatloaf.

Throw that in the bowl, too.

You could mash it around at this point if you want, but I’m waiting until all the other ingredients are in there to mix it around.

Next, grab some minced garlic. You can also chop up a clove, but I figured it’d be easier to just buy some like this and save the time.

If you do what I did, measure out 3/4 teaspoon of the pre-minced garlic. You’ll need a measuring spoon for that.

Measure out 3 of those 1/4 teaspoons of the minced garlic. Dump them into the bowl with the meat.

Next, grab an egg for this meatball recipe.

Crack the egg into the bowl with the meat. Be careful not to let any shell get in there.

Next, get your bread crumbs.

Measure out 1/4 cup of the breadcrumbs and dump those into the bowl.

Next, grab the parsley

I bought waaaaaaay too much for this meatball recipe. But we’ll get to that part in a minute.

Chop and measure out your 1/4 tsp of parsley.

Throw it into the bowl for mixing so you get that good parsley taste.

Next, grab your oregano. You don’t need it to be super fresh or anything like I had. I actually had some dry oregano in the cabinet but didn’t see it so this one in the picture accidentally went on the shopping list.

You’ll need 1/4 tsp of this, too. So, just like the last thing we did, eyeball the number of leaves that look like that much and wash them.

Cut those up as finely as you can.

Throw them into the bowl, too.

Again, you can always mix this around while you’re prepping it. Next, grab your kitchen scale.

Then, get the parmesan cheese.

Measure out about 1 ounce of that.

Dump it into the big bowl.

Once that’s in there, it’s time to mix things around.

This is probably a good part to add at least a teaspoon of salt. I didn’t do that, but I wish I had. You can also preheat your oven to 350 degrees F at this point. Alternatively, it’s safe to wait until the meatballs are in the skillet before setting the oven.

My meat kind of looked like a human brain after mixing it around in the bowl. As funny as that looks, it’s time to start breaking it up into the meatballs.

The size of the balls of meat for this meatball recipe can vary. I went with small-medium sized ones.

Next, get some olive oil.

You’ll also need to get a tablespoon measuring spoon for this meatball recipe.

Measure out 1 or 2 tablespoons of olive oil and pour it into a skillet that’s at medium to low heat. That’s so you can basically brown the meatballs but not go over the top with cooking them. That’s the oven’s job.

Next, put the meatballs into the skillet. After 3 minutes, flip them and cook on the other side.

Use a fork to flip them over and make sure none get too stuck to the skillet.

After those are done, put them on a baking sheet lined with parchment paper and aluminum foil for this meatball recipe. They were halfway (just flipped) in the below picture.

It’s okay if they get a little bunched up on the baking sheet.

When the timer goes off, make sure that they’re at least 165 degrees F with a meat thermometer.

As you can see, there’s a lot of excess olive oil goin’ on there. Mine got a little overdone but for the most part they were good.

That’s pretty much it! It wouldn’t hurt to check the temperature on a few of them in this meatball recipe just in case one didn’t quite get as done as the others.

Did you make this meatball recipe? Leave a review and any tips that can make it better!