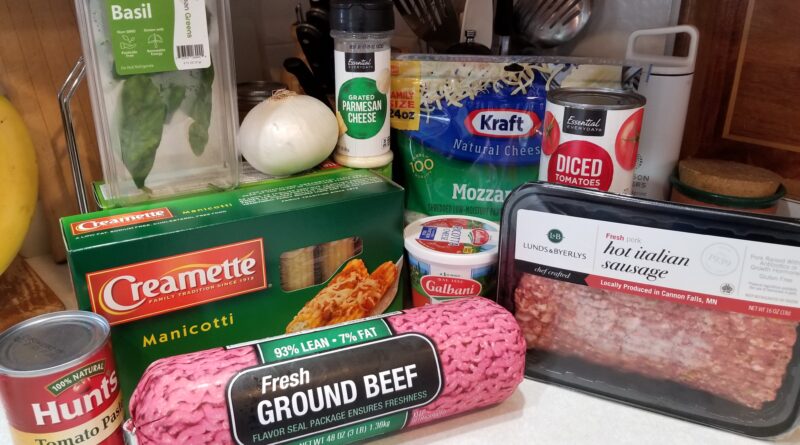 Manicotti recipes might have a lot of steps, but I’ll be covering each one in detail here. If you decide to follow along with this entire thing, you’ll have a really tasty, wholesome meal that everyone will love.

You can find all the ingredients for this at a local grocery store like Aldi or a Cub foods if you’re in the upper-midwest like me. A great pairing for this is some red wine and garlic bread. You can’t go wrong with that and maybe some broccoli, too. Let’s take a look at what you’ll need below.

Click to skip to the fast version of this (no pics)

What You Need For This Manicotti Recipe

Let’s make it happen. Step 1 of this manicotti recipe: grab the manicotti! That’s the name of the type of noodle in this.

Then, get your big pot. You’ll be boiling these up before doing anything else.

Fill it up with a lot of water. Maybe 6-7 quarts total, but I just eyeballed it.

Boil the water on the stove.

Once it’s boiling, put the manicotti noodles in there.

Let those boil for a little while, about 12 minutes or until the noodles are soft. While that’s boiling, start to prep the sauce by grabbing your can opener.

Grab the diced tomatoes next.

Get that can open for this manicotti recipe. You can’t have tomato sauce without some tomatoes right?

Once that’s open, set it aside. Consider draining the tomato juice out, too. I should’ve done that but I didn’t when I made this manicotti recipe. I don’t think it effected the overall taste too much, though.

Next, grab a wooden spoon. You need to stir the pasta periodically while you prep everything or it might stick to the bottom of the pot.

Grab your salt next for this manicotti recipe. It won’t be the last time you’ll need it, either.

Salt the pasta to taste. That doesn’t mean you need to load it with salt, a pinch or two will do just fine.

After that, get back to prepping the sauce by getting your can of tomato paste.

Crack that open for this manicotti recipe by getting your can opener again.

Set that aside once it’s open and then get a cutting board and knife.

Grab your onion, too.

Chop that up. If you have an onion the size of the one I used, you can just use half. That’s about half a cup.

Consider grabbing a bigger knife. The one I have pictured did the trick. I still needed the smaller one for another part of the manicotti recipe, so I’m still glad I used it. Cut the onion up into as little pieces as you can.

At this point, you should probably check the pasta. Take a little fork and pull some of it out to see if it’s ready to go in the manicotti recipe.

If it’s ready, grab the strainer. I advise using a big strainer bowl for this.

You’ll also need some oven mitts (maybe). In my case, the pot handles were too hot.

Let that sit and cool for a little while in the sink.

Set it aside after the water’s all drained out. You won’t need it for the manicotti recipe for a while. Then, gather up your onions into a half cup measuring cup.

Following that, grab the basil leaves.

You’ll be chopping a few of those up. Before that, grab your measuring spoons. You’ll need a teaspoon of these basil leaves.

Get the cutting board again. Chop up the basil and measure out a teaspoon.

Get the garlic for this manicotti recipe next

I went with minced, but if you want to chop up two cloves, that works, too.

Measure out about 1.5 teaspoons of that and put it in with the basil/onions.

Next, grab a large skillet and put it on the stove. You can set it to low heat for the time being.

Grab the Italian sausage for this manicotti recipe.

Measure out half a pound pound (or if you have exactly a pound just cut it in half) and toss that in the skillet. You can turn the heat up a bit at this point.

While that starts to simmer, grab the ground beef.

Get that opened and measure out 1/2 a pound. You might want a kitchen scale for this part if you have a bunch of ground beef like I did for the manicotti recipe.

That’s about 225 grams or 8 ounces. Once that’s measured out, through it in the skillet with the sausage and start mixing it around.

Start to brown the beef and sausage. Browning just means that the outside gets cooked a bit, so it looks brown. You don’t need to cook it all the way through because you’ll be baking this later. Break it up as best you can and spread it out.

While that cooks, dump the combination of basil, onions, and garlic into the skillet.

Stir all that around really well. I started using my wooden spoon to stir it and break up the ground beef more. By now, your kitchen should be smelling pretty darn good. Like old Italian grandma’s kitchen good.

Next, get your measuring spoons.

Dump that into the skillet.

Stir it all around in there.

Grab the salt. I had some sea salt from Fresh Thyme that was pretty good for this.

Measure out half a teaspoon of salt.

Dump that in with the skillet mixture.

Stir it all around some more and then grab the sugar. I know I know, seems weird putting something like sugar into this manicotti recipe but just go with it.

Measure out one teaspoon of that sugar.

Dump it into the skillet and mix it around.

Mix that up and then dump a can of tomatoes in there.

Mix those around really well.

Then, get the tomato paste. If you have a big can like I did, only put 6 ounces in.

Spoon that in there and mix it around really well.

After that, bring it to a boil and keep mixing everything together.

After it gets to a boil, lower the heat to a simmer (as low as the burner will go) and set a 15 minute timer.

Let the mixture simmer in the skillet for 15 minutes, stirring it periodically. While that’s cookin, grab a big mixing bowl for the cheese.

Then, get your mozzarella for this manicotti recipe.

Get the 1 cup measuring cup.

Then, get the ricotta cheese for this manicotti recipe.

Get the 1/3 measuring cup after that.

Get the parmesan cheese and measure out 1/3 of that.

Dump it into the bowl with the rest of the cheese.

Following that, stir your simmering sauce. You don’t want it to start sticking to the skillet.

Then, mix the cheese around as best your can for this manicotti recipe. You could use a spoon but I figured it’d be quicker to use my hands. The ricotta is pretty dense.

Then, get your egg.

Crack the egg into the cheese mixture.

Mix that around really well. After that, get a baking dish. The ideal size for this recipe is probably 13×10 so mine’s not perfect but it’ll do.

Get some cooking spray, I used duck fat. Coat the baking dish with that.

Spray it really well for this manicotti recipe.

Once that’s greased, slip a potholder on the skillet’s handle.

Pick up the skillet and pour about half the sauce into the baking dish.

Spread that pasta sauce around as best as possible.

Then, start stuffing those cooked pasta tubes with the cheese mixture. They aren’t supposed to be overflowing with cheese for this manicotti recipe specifically. If you want that, I recommend multiplying the amount of cheese by three.

Start putting the cheese-filled tubes on top of the sauce.

You’re on the home stretch of the manicotti recipe now!

Once the cheese is all on there, cover it up with some cling wrap.

When you’re ready to bake it, preheat the oven to 350 degrees Fahrenheit and then bake for 35 minutes. Once it’s done, let it cool for at least 5 minutes, maybe longer than that. How good did this manicotti recipe turn out? Look at all that mozzarella!

Another up-close shot so you can really see it:

Where Did Manicotti Come From?

Well Italy, duh. At least that’s what most people think. The exact origins/inventors of it are unknown, unfortunately, but the concept of stuffed pasta shells has been around for a long time. This one was pretty basic, too. You could make this with all kinds of stuff like shrimp, other types of cheeses, and other types of meats. There’s tons of different options when it comes to making a manicotti recipe!