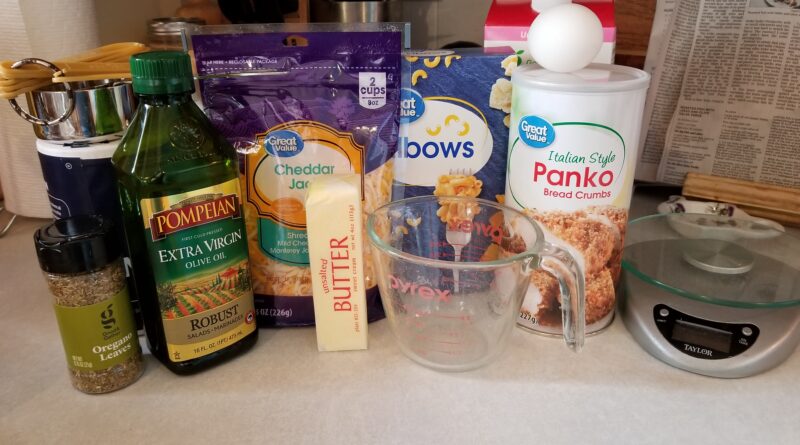 Mac and Cheese Recipes are pretty simple in general and this one is no exception. It has a few more ingredients and steps that your typical Easy Mac recipe does, but it will make a way better bowl of the stuff. Plus, if it’s just you and someone else eating it as a side dish, you’ll end up having a decent amount left over.

Even if you eat it as a dinner, you still might have some leftovers.

Here’s what you’ll need to make it:

First Step in This Mac and Cheese Recipe

To kick things off, get that big pot.

Fill that up with a good amount of water. Couple quarts at least.

Then, set that back on the stove at high heat for this mac and cheese recipe. Get the water boiling or close to boiling before putting the macaroni in there.

Next, get the kitchen scale to weigh out the 8 ounces of macaroni (unless you bought exactly that amount).

Get your macaroni out. Make sure that it’s elbow, too, for this mac and cheese recipe.

Get the bowl or measuring cup to set on the scale.

Fill it up until the scale shows 8 ounces.

After that, wait until your pot of water is boiling to put the macaroni in.

Pour it in there. Now this mac and cheese recipe is really starting to heat up. Alright no more dad jokes.

Throw in a pinch. It’s just to taste, so you don’t need to be measuring out a big tablespoon or anything like that.

Now, get a wooden mixing spoon for this mac and cheese recipe.

Mix around the elbow macaroni periodically or it will get stuck to the bottom of the pot. Mine was sticking already right after I poured it in, so be careful.

While that’s boiling, grab your milk. Yea, I know, I probably should have gone with 2% or something. I had plenty of almond and not much else, so I went with this. It was unsweetened so I figured it would work just as well and not mess up the taste.

Get A Pyrex for this Mac and Cheese Recipe

Measure out half a cup of milk.

Then, get a little pot. Mine could hold about 2 cups so it was perfect. Any pot really works, but you only need a small one.

Turn the burner to low and pour the milk in for this mac and cheese recipe.

After that, double check that it’s on low. You don’t want to accidentally start boiling the milk.

Now is a great time to stir the elbow macaroni again.

That can really stick to the bottom of the pan, so just keep an eye on it. After that, get the scale again.

You need to measure out the cheese, so grab that.

I feel like I cheated a little bit since I just bought cheddar jack instead of mixing different cheeses myself. That worked out find, though.

Using that same container or bowl that you measured the pasta with, measure out 4 ounces of cheese.

Following that, get a big spoon. Something bigger than a spoon for eating but not a gigantic one.

Use the big spoon to mix the cheese and milk mixture around.

It will take its time to melt. While that’s melting, check on the elbows again for this mac and cheese recipe. Scoop one or two out of the water to check and see if they are soft yet. If they are, it’s time to drain it.

Before you do that, don’t forget to mix the cheese every minute or so. Otherwise, it will get a gross cheese skin on top.

Next, turn off the burner for the elbow macaroni. If you don’t want to turn it off, turn it down all the way.

Then, get your mesh strainer.

You may need oven mitts if you used a pot like the one that I did.

While that’s draining, get a stick of butter and a butter knife.

Cut 1/4 cup of butter. If you don’t have a wrapper with measurements, just use the scale to measure out 2 ounces of it.

Once you have that measured out, drop it into the pot.

Let that melt a little bit before throwing the pasta back in with it for this mac and cheese recipe.

Dump the elbow macaroni and mix everything around really well. Get it all coated and buttery.

Then, let’s revisit the cheese for this mac and cheese recipe

Stir that around a little bit more and get ready to dump the melty goodness all up in that elbow macaroni.

But first, grab an egg.

Crack the egg into the elbow macaroni. You heard that right, just go with it.

Mix that around really well. Following the egg, get your olive oil.

Get your measuring spoons.

Measure out 1.5 teaspoons of that olive oil and dump it into the pasta.

A little more or less probably won’t hurt the mac and cheese recipe.

Once the other .5 tsp is in there, mix it around.

Now it’s time to get the cheese ready. Mix away any skin that’s accumulated in the last few minutes.

Take the cheese and start pouring it as evenly as you can on the elbow mac.

Stir that around really well once it’s all in there. Then, get your oregano for this mac and cheese recipe.

Sprinkle some oregano in while you continue mixing it.

Mix that around really well.

Grab a big bowl or dish that can fit the mac and cheese.

Pour it all in there, spreading it out evenly. This mac and cheese recipe really looks good!

Then, get your panko.

Measure out 3/4 cup of that and spread it evenly over the top of the mac and cheese for a nice crust.

Spread it out as evenly as you can.

Your finished product should look a little something like this below:

Once it’s done, you can serve it up right away or put some in the fridge/freezer for later, up to you!

Notecard Version of the Mac and Cheese Recipe

I hope you liked this mac and cheese recipe!