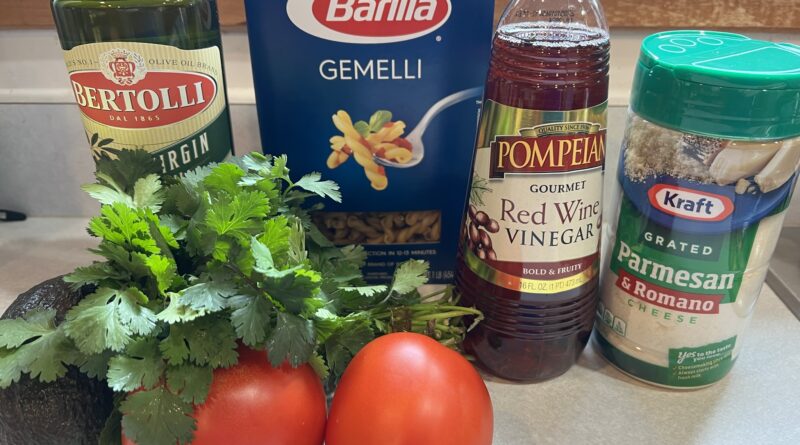 Gemelli pasta is a spiral shaped noodle that has a great consistency and works for a lot of different meals. I threw together this pasta salad recipe because it works well any time of the year and it’s a pretty healthy dinner.

Click Here to Skip To Notecard Version of Recipe

What You’ll Need to Make This Gemelli Pasta Salad

Let’s get this gemelli pasta started by grabbing a cutting board and a small kitchen knife.

Get your large avocado. I got lucky enough to find a ripe one when a lot of them were messed up or too hard at the store.

Chop up the avocado for this gemelli pasta.

Dump that avocado into the large mixing bowl.

Once that’s in there, go find your tomatoes for the gemelli pasta salad.

Wash those guys off.

Dry them before cutting.

Set the tomatoes on the cutting board and chop them up. You can leave out the center parts for the Gemelli pasta.

Once those are chopped, throw them in the bowl with the avocado.

Then, grab 1 cup for this part of the Gemelli pasta salad.

Get your grated parmesan and romano cheese.

Measure out 1 cup of that. Look at all that cheese.

Dump that into the mixing bowl with the avocado and tomato.

Go and grab your cilantro next. Whenever I think of cilantro, it always reminds me of Emeril Lagasse talking about putting some into whatever he’d be making on his Food Network show back in the day.

After washing it, chop up a handful on the cutting board.

Measure two tablespoons of the cilantro for this Gemelli pasta salad and throw them into the mixing bowl.

Get your extra virgin olive oil and measure out half a cup for this part of the gemelli pasta recipe.

Pour that into the big mixing bowl and then grab your lime juice.

Once that’s done, grab a spatula and mix things around. That olive oil might make the cheese clump up, so do your best to work that around in there.

It’ll be ready for the fridge when it looks like the image below.

This doesn’t have to go in the fridge, but I feel like chilling it helps all the juices marinate with the fruits more (yea, avocados and tomatoes are both fruits). Plus, most pasta salads are served cold.

Anyways, cover your bowl in some cling wrap and put it in the fridge for about 15 minutes. Once that gemelli pasta is done cooking and cooled off a bit, it’ll be time to grab it again.

Fill that with some water, about half way. That’s maybe a few quarts. Turn the heat to high on the burner.

Once that water is boiling, dump all the noodles in there.

Set a 12 minute timer on the stove. That’s a pretty standard amount of time for pasta to be boiled.

While it’s in there, throw in a pinch of salt.

Use a wooden spoon to mix it around periodically so it doesn’t stick to the bottom of the pot.

Once that’s done, grab a strainer. The noodles should be soft but not too soft.

Set the strainer in your sink.

Dump the cooked gemelli pasta in there to drain. Use oven mitts as the handles on the pot will be pretty hot.

Once that’s drained, either let it sit there for the time being or dump it back into the main large pot. Either way, go get the large bowl out of the fridge and combine the two things together in the large pot.

Mix that around really well and grab a large bowl for the gemelli pasta.

Pour everything into the serving bowl and you’re all set to enjoy some Gemelli pasta salad!

Notecard Version of it

Did you make the Gemelli pasta salad? Leave a review and any tips for people to make it better!