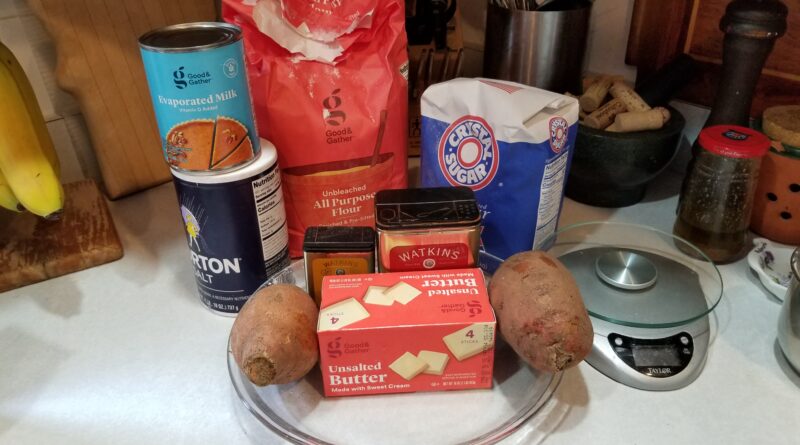 Sweet potato pie is the cousin of your favorite Thanksgiving dessert that comes from pumpkins. At the end of the day, there really aren’t that many significant differences. They look similar, taste similar, you get what I’m saying. End your next dinner the right way with one of these awesome sweet potato pies.

This recipe will take you through step-by-step for what you need to do to make this come to life in your kitchen. If step by step isn’t your thing, no worries! You can skip straight to the notecard version of the recipe, too.

What You’ll Need to Make This Sweet Potato Pie

Next, grab a small-medium sized bowl and put it on the scale.

After that, grab your bag of flour.

Measure 4.5 ounces into the bowl on the scale.

Once you’ve got enough of that measured out for this part of the sweet potato pie recipe, grab a large bowl.

Following that, grab a large bowl and throw the flour in there.

Then, get some Crisco (also known as shortening).

Once the Crisco is out, measure 1 ounce of it. I actually made a top crust by mistake so the scale in the picture below is showing the amount for two crusts, however, you only need a bottom for this sweet potato pie recipe.

After that’s measured, dump it into the large bowl with the flour.

After you do that, grab your dough cutter. We won’t be using it for dough, though. It also works great for butter in this sweet potato pie recipe.

Grab your butter, too.

Cut that in half and push it through the dough cutter into the big bowl with the Crisco and flour.

Take your salt and throw a pinch of it into the big bowl.

Once that’s in there, start mixing the ingredients around. Don’t be afraid to get a hand in there, too.

You’ll be ready for the next step in this sweet potato pie recipe once the dough resembles peas or large breadcrumb shapes.

Next, fill a little mixing bowl with some ice cubes.

Take that over to your sink and grab some measuring spoons.

Measure out 2.5 tablespoons of cold water into the little bowl with ice for this part of the sweet potato pie recipe.

Fill that little bowl up with the water.

After that’s all filled, pour the cold water only (hold the ice cubes) into the large bowl over the dough.

Mix that around so the water gets spread out among the dough for this sweet potato pie recipe.

Next, get a mesh strainer. This helps with flouring your work surface for the sweet potato pie dough.

Get the All-Purpose flour again.

Put a handful in the mesh strainer.

Use the strainer to spread it out on a clean surface.

Spread that out and then throw the dough on to the surface.

Start rolling the dough around for this part of the sweet potato pie recipe.

Some of it might get stuck to the rolling pin. That’s not a big deal, just make sure to scrape it off. Once the dough has been rolled into a nice round ball, cut that in half with a butter knife.

Flatten the dough with your palms.

Wrap each disk of dough up in some cling wrap and throw that in the fridge for at least 1 hour.

It could go in the fridge for up to a few days for this sweet potato pie recipe, however, we want to get this thing done in one day.

While that’s in the fridge getting cool, you can work on the sweet potatoes. Take 1-1.5 pounds of them out on the counter.

Wash those potatoes before doing anything with them. Also, get a large pot and put that on your stove.

Fill it up with water about halfway.

After that’s full, bring the water to a boil. Once it’s at a boil, put the potatoes in for this sweet potato pie and keep the burner on.

Those will take a while to soften up. Set a timer for about 45 minutes and keep an eye on things while they boil.

When they’re done, run them under cold water so they don’t burn you when you start peeling them.

Once they’re cooled, completely peel them and put all the insides (minus anything that looks black/dead) into a big bowl for the sweet potato pie.

You can mash those up and mix things around or just keep moving along with the rest of the ingredients. We’re going to be putting it in a food processor so that’ll take care of mashing everything up really well. Next, get your butter out.

Now is also a good time to preheat your oven to 350F. I recommend doing that for the sweet potato pie before you start the final steps with putting the dough in the pie plate.

Now get out two sticks of butter and throw them into the bowl.

After the sticks of butter are in the large bowl, get your evaporated milk.

You’ll also need a can opener for this part of the sweet potato pie recipe. Unless your can has a tab on it, sometimes they do.

Open the can up.

Fill that with 1 cup of evaporated milk.

Take your cup of evaporated milk and pour it into the bowl with the butter and sweet potato.

Once that’s in there, get your sugar.

Measure out 1 cup of sugar.

Dump that into the rest of the mix for the sweet potato pie filling.

Now that it’s all in, get some nutmeg.

Measure out 1/2 a teaspoon of nutmeg and dump that in.

After that, grab some cinnamon.

Take your cinnamon and dump 1/2 a teaspoon in there for the sweet potato pie recipe.

Now, you’ve got a choice to make. You need to mix everything together pretty well, so, you can either try to do that by hand or use something like a food processor. I ultimately decided to go with the food processor.

Grab a food processor. Our Cuisinart is pretty old, but it works pretty darn well.

Pour the filling mixture into that.

Make sure everything’s locked into place where it’s supposed to be, and the blade is also locked in correctly.

Close the lid and use the pulse button (or if you don’t have pulse) to mix everything for about 15-25 seconds. Then, throw one egg in. To tell you the truth, I kind of forgot to put the egg in before.

Once the egg’s in, mix everything around a bit more.

Your sweet potato pie is about to come together! Next, get your pie plate.

Then, grab your dough out of the fridge.

Start to spread it around the plate with your hands.

Make sure the dough is fully pressed around the pie plate as best as possible without having the dough tear in any places.

After that, pour the sweet potato pie mix into the pie crust.

When that’s all in there, make sure it’s evenly spread out, too.

Before it goes in the preheated oven, put some aluminum foil on the rack it will be going on or the rack below that one. The aluminum foil is in case any of the filling leaks over the side of the pie. This happens more with fruit pies, but it never hurts to be careful.

Put the sweet potato pie in.

Set the oven time to about 60 minutes.

When you think it’s done, put a butter knife in the middle of it. If the knife comes out clean, it’s done. Mine had some pie on it, so, I put it back in for another 15 minutes. That pretty much finished it up.

Did You Make It? Please Leave A Review And Any Suggestions to Make It Better!