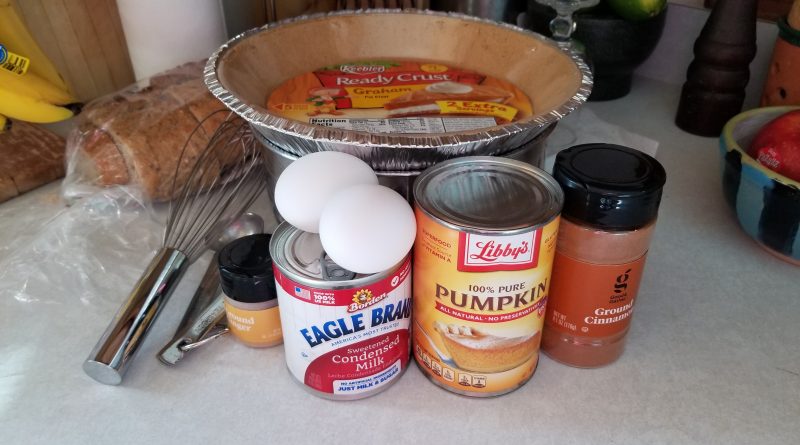 Pumpkin pie recipe is what I’ll be throwing together in the kitchen for this one. Even if you just like eating this around Thanksgiving, it’s great any time of the year. Makes a great dessert, snack, or both.

We all know we’ve opened the fridge at a random time after November 25th and gone for some pie. I’ve done it, you’ve done it. Now let’s do this.

Click here to jump straight to the quick version

What You’ll Need to Make This Pumpkin Pie Recipe

Step 1 For Your Pumpkin Pie Recipe

Preheat your oven to 425 degrees F

Grab your medium bowl. I guess you could use a bigger one to make this Thanksgiving favorite, but this size pictured works.

Next, grab your can of Libby’s 100% Pure Pumpkin. You will also want a spoon since it’s pretty thick. I tried shaking it out and that just splattered pumpkin all over the counter.

Get it all in the bowl for this pumpkin pie recipe. You could also use a spatula, I guess. This won’t seem like enough (or maybe it will, definitely didn’t for me though) but once everything else mixes together in there, it will be plenty to fill up the pie pan.

Grab your eggs next. One of mine had a little crack in it but I think that was my fault. Might’ve done it when I was prepping for this pumpkin pie recipe.

Next, dump your 1 teaspoon of cinnamon in there. Cinnamon is thought to be pretty good for your health. Seriously, check out this article about it.

Once you get your ground ginger in there, grab your salt. You need to throw a 1/2 teaspoon of that in there.

After your salt, it’s time to whisk it all together. You could also use a mixer since it’s kind of dense, but my whisk actually worked pretty well.

Just start slow and work everything together, it should mix pretty well. Once you’ve got that mixed together and there isn’t anything caked in the whisk, grab your pie crust. I used a graham pie crust from Keebler. I’m a pretty big graham cracker guy, what can I say? At some point, I’ll do a recipe with a regular old crust, so we can shake things up a bit.

After opening up your crust, then pour your mixture in for this pumpkin pie recipe

Look, as much as I like eating the batter raw and I think everybody does, too, I gotta mention the health warning. Since salmonella is a thing, don’t eat the batter unless you don’t care. Then go nuts once it’s in the oven licking all the utensils. You might need a spatula to really get everything out of there.

Put it into your oven if it’s ready and preheated.

Once the time’s up, reduce the temperature to 350 degrees F

Bake for 35-40 minutes. I just did this part of the pumpkin pie recipe for 35 minutes and it turned out really well.

Once the 35-40 minutes is done, take your pumpkin pie out with some oven mitts and put it on the stove.

Stick a knife through the pie and see if it comes out clean or with pie goop on it. For this pumpkin pie recipe, if there’s mixture on the knife, you need to put it back into the oven for a little bit more time.

My knife came out clean, so I just let it cool after that. You can garnish yours however you want, I chose to put some roasted cacao nibs in the middle.

Not too many, but just enough to get a couple on every slice.

There ya have it! You should get a tasty pumpkin pie from this recipe every time. Unless your oven breaks or some of the ingredients are messed up. Kind of hard to mess up the canned pumpkin or the condensed milk. Serve with cool whip, whip cream, ice cream or just plain!