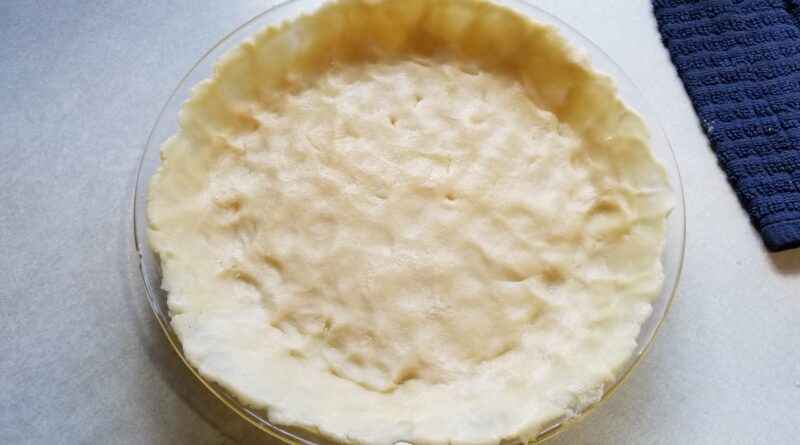 Pie Crust Recipes might seem daunting, but they aren’t too difficult. I’ll take you through step-by-step in this one to show you how it’s done. This will cover making a bottom and a top crust, so, if you are just making a sweet potato or pumpkin pie, you can divide all the ingredients in half.

Click to Skip to The Notecard Version of Pie Crust Recipe

Let’s make this pie crust recipe. For the first step, get your kitchen scale out.

The measurements need to be pretty precise, so I recommend doing it by weight instead of just using measuring cups. Grab a small or medium sized bowl next and put that on the scale.

Once that’s on there, grab your bag of flour for the pie crust recipe.

Measure out exactly 8 ounces of that in your bowl on the scale.

Here’s about half that:

Then, dump the flour into your large mixing bowl.

Once you have that in there, get some shortening (I used Crisco). It’s basically fat that people use instead of butter or margarine. In our case, we’re using both for this pie crust recipe.

Measure out 2 ounces of that on the kitchen scale. Again, remember, we’re aiming for precision .1 ounces or .2 ounces more aren’t the end of the world, though.

Once that’s done, dump the shortening in the large bowl for this pie crust recipe.

Next, grab a dough cutter. You won’t be using it for any dough at this point, but it can really help with the butter.

Once you have that out, grab a stick of butter.

Use the dough cutter to cut up the stick of butter into your large bowl of flour.

You could also just use a butter knife to cut off little pieces of the butter one at a time into the flour. Either way, make sure the butter gets broken up into little pieces. Once that’s all in there, grab some salt.

Throw a pinch of salt into the bowl for this pie crust recipe. Then, mix the dough up. You’ll probably need to do it by hand to really get the consistency you’ll be aiming for, which is having the dough be like peas or large breadcrumbs.

Here’s what it should look like when you’re ready for the next step:

At this point, fill up a little bowl with ice cubes.

When the little bowl is full, grab your measuring spoons for this pie crust recipe.

Measure out five tablespoons of cold water into the little bowl of ice.

You don’t need a million ice cubes, but just enough to make sure the water gets really cold.

Take that water in the little bowl and dump it into the large bowl with the dough. Do not let any ice fall in there.

Do that part of the pie crust recipe quickly so there isn’t too much extra water from melting ice. Then, work the dough around so the water gets mixed into all of it.

Next, grab a mesh strainer.

Take the mesh strainer and grab some flour, too.

Put a handful of flour into the strainer and use that to spread it out on a clean work surface.

I had some trouble with it piling up in a few places. Just do your best to make it spread evenly.

Once that’s spread out, dump your dough on the surface for this part of the pie crust recipe.

Roll the dough around a bit and then start rolling it out with a rolling pin.

Once you’ve rolled the dough around a lot, you should have a nice smooth ball. Take a butter knife and cut that ball of dough in half evenly.

Press each half of the dough ball for this pie crust recipe into flat disks.

Take those flat disks and wrap them in saran wrap. Place them on a medium-sized plate.

Place that plate in the fridge for at least 1 hour or up to a few days. You can also freeze it for about a month.

When it’s ready to be paired with some filling, grab a pie plate and press it around until it’s covering the entire inside with the edges and everything.

Did You Make It? Leave a Review and any Tips on Making It Better!