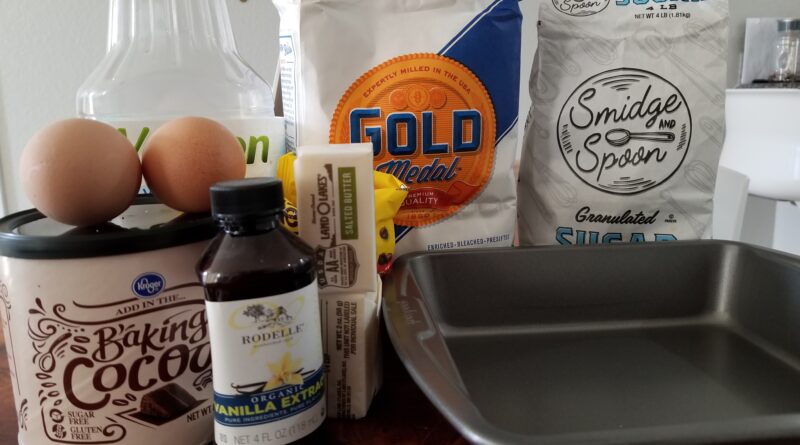 Brownie recipes are pretty easy and make for a great snack or dessert. There are a bunch of different variations you can do, so don’t feel like you need to follow this one to a T. At the same time, this one will give you the classic brownie that everyone loves.

Here’s what you’ll need to make it. Most stores like Aldi or Publix carry all the ingredients you’ll need.

Step 1 of this Brownie Recipe

Then, get a bowl.

Unwrap the butter and throw that in the bowl.

Microwave it until it’s melted or mostly melted.

While that’s in the microwave, preheat the oven to 375 degrees F

After that, get the melted butter and put it on the counter.

Get your semi-sweet chocolate morsels.

How many times have you just been tempted to eat a bunch of them straight from the bag? Measure out 1 cup of those and pour it into the butter.

Pour those into the butter.

Make sure that they melt into the butter, too. Mix the chocolate around as best as possible.

You should have something like this for your brownie recipe so far:

A nice and buttery chocolate soup. As tempting as it is the just start eating this, don’t. Get a bigger mixing bowl next.

Crack each egg into the big bowl.

Once the eggs are both in, start mixing them around as best as possible for this brownie recipe. As you can see, I didn’t have a whisk handy so I used a butter knife. We do what we can, right?

Moving on. Get a measuring cup or the same one that you used for the chocolate chips.

You’ll need to measure out one cup of that.

Pour it into the beaten eggs for this brownie recipe.

Mix that around really well. Again, as you can see, I was using a butter knife. Crazy times we live in.

Following that, get your vanilla extract.

Measure out a half teaspoon or do your best to eyeball the right amount. I didn’t have any measuring spoons for this, so I eyeballed the amount.

Mix that up. Once it’s all mixed, grab your bowl of butter and chocolate.

Take that bowl and pour all of it into the egg mixture.

As you might be able to guess, the next step is to mix all of that around really well.

Again, it will probably be tempting to just start eating at this point in the brownie recipe but do your best not to. Once that’s mixed, get some flour.

I used Gold Medal. It’s a pretty historic brand of flour. If you’ve ever been to Minneapolis, you’ve probably heard about it. It’s perfect for this brownie recipe! Get your measuring cup next.

Measure out a half-cup of all-purpose flour.

Dump that into the big bowl with the chocolate.

Mix it all around really well. I upgraded from a knife to a spoon. Everybody needs a big spoon for their brownie recipe at some point. After that’s mixed up, grab some baking cocoa.

You’ll need your measuring cup again. This little one that I had was a trusty lil’ thing.

Measure out 2 ounces of cocoa powder. This part will be pretty difficult if you don’t have ounces. Again, though, if you eyeball it as best you can, you should be fine.

Dump that in with the rest of the brownie recipe mixture. Then, get some vegetable oil. This will act as a thickening agent for the cocoa powder.

Measure out about a teaspoon of that and pour it on the cocoa powder.

Mix all of that around really well for a nice brownie batter.

Once that’s all mixed up, start pouring the mixture for this brownie recipe into your pan.

You can probably use the spoon to smooth the batter out. A spatula would also be good for that.

Once it’s done in the oven, you should be looking at a final product like this one: