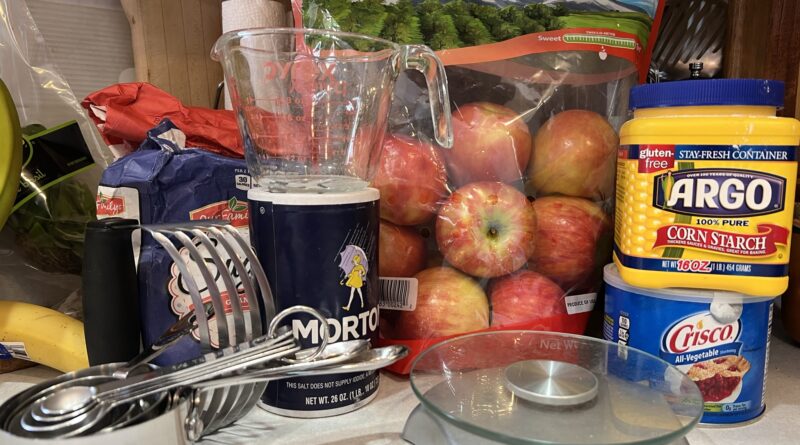 Apple pie recipes aren’t all that complicated. It’s true that they can take a while (depending on how long you want your dough to chill) but you can have one hot out of the oven in about an hour. These are awesome for dessert most of the year, but especially the months between spring and fall.

This specific recipe is around 2/2.5 hours because we’ll be putting the dough in the fridge for an hour and baking it for another hour. Overall, the prep is pretty easy. Not as easy as something like Chex mix or puppy chow, but this is pretty rewarding.

What You’ll Need to Make This Apple Pie Recipe

Let’s get started with the step-by-step of this apple pie recipe. First, grab a large bowl. It’s kind of hard to tell with the picture, but I started with a medium one by mistake and swapped one in that actually worked for this.

Grab a bag of flour.

A wise man once told me that apple pie recipes (and other pies) are pretty sensitive, so you need to make sure that you get pretty accurate measurements on everything. That’s why you’ll also need a kitchen scale here.

In addition to the kitchen scale, grab a smaller bowl.

Start putting the flour in the little bowl. The one I used here actually wasn’t big enough but I just dumped it in the main mixing bowl after it had six ounces and then measured out the last two. You’ll need to measure out 8 ounces total.

Once all the flour’s measured/added to the bowl, grab a full stick of unsalted butter. You’ll want it to be cold so leave it in the fridge up until this point.

Grab a butter knife for this part of the apple pie recipe. You don’t HAVE to do this, but using a knife to split up the butter is a great way to go about doing it.

Use the knife to cut up the butter into the flour. You could just throw the whole stick in and mix everything by hand to break it up, too.

That butter will take a minute but once it’s done, you should have something like the picture below.

Next, grab the Crisco for this part of the apple pie recipe. I know that most of the recipes on the internet don’t include this part with making the dough, but I thought I should throw it in. Never hurts to have it all in one place.

Crisco, sometimes referred to as “shortening” (and it is on the container here) is basically just fat that’s solid at room temperature. So no matter how tempted you get, it’s probably not a great idea to eat a spoonful straight out of the container.

Fill up that little bowl until the scale reads 2 ounces.

Dump that into the flour/butter mix next. Following that, throw a pinch of salt into the bowl.

Once your pinch of salt is in, start mixing it around. You might need to get your hands in there to really work things around for this part of the apple pie recipe.

Mix it around until you get something that looks like large breadcrumbs or peas.

It’ll be about ready when you get to this point:

Then, get your measuring spoons for this part of the apple pie recipe.

This might sound weird, but you’re going to be getting some water now. Actually, grab a little bowl first. The water’s going in there.

The Apple Pie Recipe’s About to Get Wet

Put five tablespoons of cold water into your little bowl.

Once that’s in there, get a few ice cubes.

Yea, you read that right. There’s ice cubes in this apple pie recipe. Anyways, put those in the little bowl with the water.

You’ll need to move quickly here since you don’t want much of the ice to melt. With your hand holding the cubes in the bowl, pour the water into the bowl with the dough in it. Move the dough around a little bit so the water gets evenly disbursed. Then, clear some counter space and clean it up. You need this for the dough.

Next, get your flour for this part of the apple pie recipe.

Do your best to sprinkle it all over the countertop or whatever your surface is going to be for rolling the dough. I’ll be honest, I did a pretty terrible job with this. In hindsight, I should have used a mesh strainer or something to get the flour sprinkled on to the counter more evenly. This won’t be the last pie I make, so it’ll be better next time!

After your surface has been floured, get a rolling pin out. We’re gonna roll it.

Next, dump the dough mixture out on to the rolling surface.

Now, knead the dough together. It’ll be a little bit sticky, so it might get caught on the rolling pin. You’ll really want to make the dough ball with your hands first, add some of the flour and then roll it out from there.

Once you have a nice ball of dough for this apple pie recipe, take a butter knife and slice it in half as evenly as you can.

Take each half of the dough ball and flatten each one with your palms. Here’s the first one:

Next, get some plastic wrap for the dough.

Wrap up each disk of dough in the cling wrap.

Once the time’s close to being up (whatever amount you decide on) go and grab the apples to prep the filling for the apple pie recipe.

Measure out 1 pound of apples. Once they’re sliced and cored, it’ll really be about 3.5 apples.

Then, get a potato peeler and a cutting board so you can get the skin off the apples.

Once the apples are peeled, core them.

After they’re cored and you’ve made sure that you have 1 pound of peeled apples, put them in a medium bowl.

Time to put some sugar to these apples for the apple pie recipe.

But first, lemon juice. Grab some of that.

You also need to get the measuring spoons again.

Take those and measure out two tablespoons of lemon juice.

Next, get a half cup measuring cup.

Then, get the sugar for this part of the apple pie recipe.

Measure out half a cup of sugar and dump that in with the apples.

Make sure to really mix that in with them. Then, get your cinnamon.

Sprinkle some cinnamon in. A little more than a pinch, but not a ton.

Make sure that gets mixed around well, too. Now, it’s time to grab your dough out of the fridge.

I didn’t do this, but your dough for the top crust will be better if you leave it in the fridge while you’re prepping the pie dish. Take one of the disks of dough out, take the cling wrap off, and put it in the pie dish like the picture below.

Once that’s in there, start to spread it out with your hands as best as possible so it’s covering the entire inside of the dish.

Then, take your apples that should now be mixed around with the cinnamon/sugar.

Dump those into the pie dish for this part of the apple pie recipe.

Then, get the sugar and that measuring cup.

Take that and measure 2 cups of sugar into the same medium bowl you used for the apples before.

I hate to admit this, but I completely dropped the ball and forgot to put the 1/4 cup flour and 2.5 tablespoons of cornstarch into it at this point. Don’t be like me. Remember to put that stuff in there! I did remember the cinnamon and the nutmeg. Speaking of the cinnamon, get that.

Sprinkle some into the filling for this apple pie recipe. There doesn’t need to be a specific amount, but about a teaspoon is probably good.

Next, get your nutmeg.

Sprinkle some of that into the bowl.

Once that (AND YOUR CORNSTARCH + FLOUR IS ADDED DON’T FORGET!!!), mix it around.

I may have also forgotten the 1 ounce of salted butter that’s maybe supposed to go in there. Whoops.

Dump the mixture into the pie crust with the apples for this part of the apple pie recipe. Now is probably also a good time to preheat your oven to 350 F.

Next, grab the dough for the top of the pie crust out of the fridge. Mine was already on the counter because nobody’s perfect.

Flatten that out as best as possible on the counter.

The rolling pin should help with that for this part of the apple pie recipe.

Things may get sticky at this part of the apple pie recipe, so be careful it doesn’t get too torn up. In a perfect world, it would roll out really thin and be super easy to pick up. Consider using a spatula to scrape it off the counter.

Then, take that dough and lay it on top of the filling, joining it with the other dough to close off the pie.

Use the spatula or a knife to cut a diamond or cross in the center of the pie for ventilation.

Then, get ready to put it in the oven.

Slide it in there for 60 minutes to start. I ended up leaving mine in for an extra 10. The other thing that’s important is to have some aluminum foil on a rack below the pie or below the pie plate on the same rack. Fruit pies tend to leak over the sides and your oven will get really sticky with this apple pie recipe if you don’t have something to catch all of it.

So that’s it, the pie’s finished. Here’s an up close shot:

I did also completely forget to brush the top with milk, cinnamon and sugar before it went in the oven. That made it less brown but didn’t really affect the taste too much. Try and remember to do that if you make one!

Did You Make This Apple Pie Recipe? Leave a review and any tips to make it better!