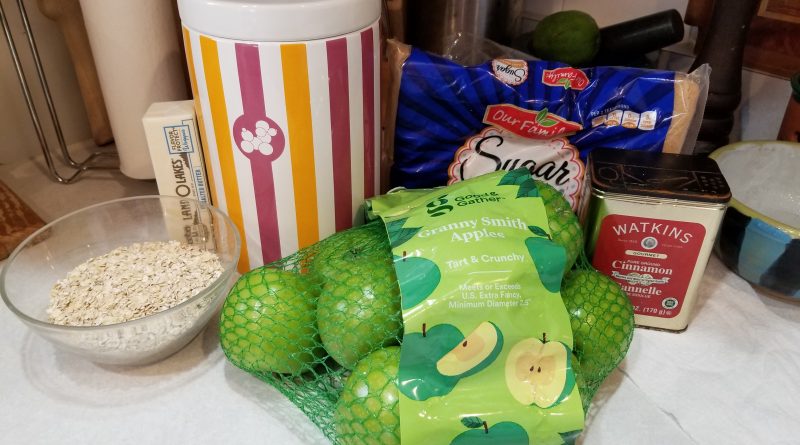 Apple Crisp Recipe’s can take a little longer than other desserts. The main thing that’s time consuming is peeling all of the apples. Making this calls for about 3 LBS of ’em. If you just want to skip making this, Aldi also has some of those McDonald’s-style apple pies that are pretty good.

The good news is that my local Target store has bags of Granny Smith’s in that size so it was pretty easy to pick some up.

Dump your 1/2 cup rolled oats into the bowl. My medium bowl’s gotten a pretty good workout the last few weeks with everything I’ve been making.

Next, go and grab your flour.

Pour in your half cup of all-purpose flour for this apple crisp recipe.

Next, grab the brown sugar.

Next, grab the mixing spoon for this apple crisp recipe.

Mix around the dry ingredients. These can be set aside for the time being or put in the fridge.

Next, get your potato peeler. You’ll be using it for the apples today, sorry potatoes.

Get your first apple and wash it off quick. You’ll be peeling the apples and then cutting them up with the coring tool.

You may want to have a bowl to put the peels in since there will be a lot of those for this apple crisp recipe.

The peeling process is going to take a while. Be careful not to cut yourself peeling them, either. Instead of doing it by hand, you could also buy one of these things on Amazon that can automatically peel each one in a fraction of the time.

It’s worth looking at, trust me. Once each apple is peeled, shove it through the coring tool.

Feel free to press this down on a cutting board, I found that was the easiest way to do it.

Get ready to do this a bunch of times since there are a lot of apples. You need to fill up 6 cups of the apples before you’re done. Once each cup is full, dump it into the baking dish for this apple crisp recipe.

Am I the only one that thinks of Halloween whenever I’m doing anything with Granny Smith apples?

Look at all of ’em on that cutting board. This ended up taking me about an hour and a half, so my back was pretty sore by the end. Once you’re all finished cutting everything up, these should look like the picture below:

Next, measure out your teaspoon of cinnamon for the apple crisp recipe. That needs to go in because it adds a nice flavor to the apples. Additionally, preheat your oven to 375 degrees F at this point. Initially, I had preheated the oven but then just turned it off because peeling the apples took too long.

Measure out 1 teaspoon of that cinnamon for the apple crisp recipe.

Dump it evenly over the apples in the baking dish. This reminds of some oatmeal I reviewed not too long ago.

The apples may start to brown a little bit. That shouldn’t be too big of a deal, though, since it would be worse with most other apples. The Granny’s will work best for these recipes. Some types of apples could flat out turn to mush, you don’t want that.

My cinnamon could have been distributed a little more evenly, oh well. The taste shouldn’t be affected that much. Next, it’s time to get the butter.

Measure out 1/3 cup of butter for this. If you have a stick of butter, you can just slice it at the 1/3 cup marker. That’s pretty nice how they do that with the measurements on the side.

This is a point in the apple crisp recipe where you have a choice to make. You can either melt the butter in the microwave or cut little chunks of it at a time off into the dry mix. I will be going through the chunk approach. The problem that I ended up having with that was that not all of the dry mix was cooked very well since the butter only touched most of it, not all.

Not the End of the World for this apple crisp recipe

This wasn’t the end of the world, but I just want to note that.

If you decide to go with the chunk approach, cut them off in about the sizes as shown in this picture.

Mix those chunks around with the wooden spoon to distribute them evenly in there.

Start to pour the dry mix on top of the apples. This is where it all comes together.

This is what it should look like before going into the oven.

Put it into the oven at 30 minutes. You may need to a little more time, but the key is to get the apples nice and soft while avoiding burning them. If I made this again, I would start checking them after 25 minutes and potentially leave them in up to 40 while checking every 3-5 minutes.

Once it comes out of the oven, your apple crisp recipe should look more cooked than this one above. It actually tasted pretty decent, but if I did it over again, I’d definitely melt the butter and pour it into the dry mix.

Let it cool or serve right away. Goes well with some ice cream.