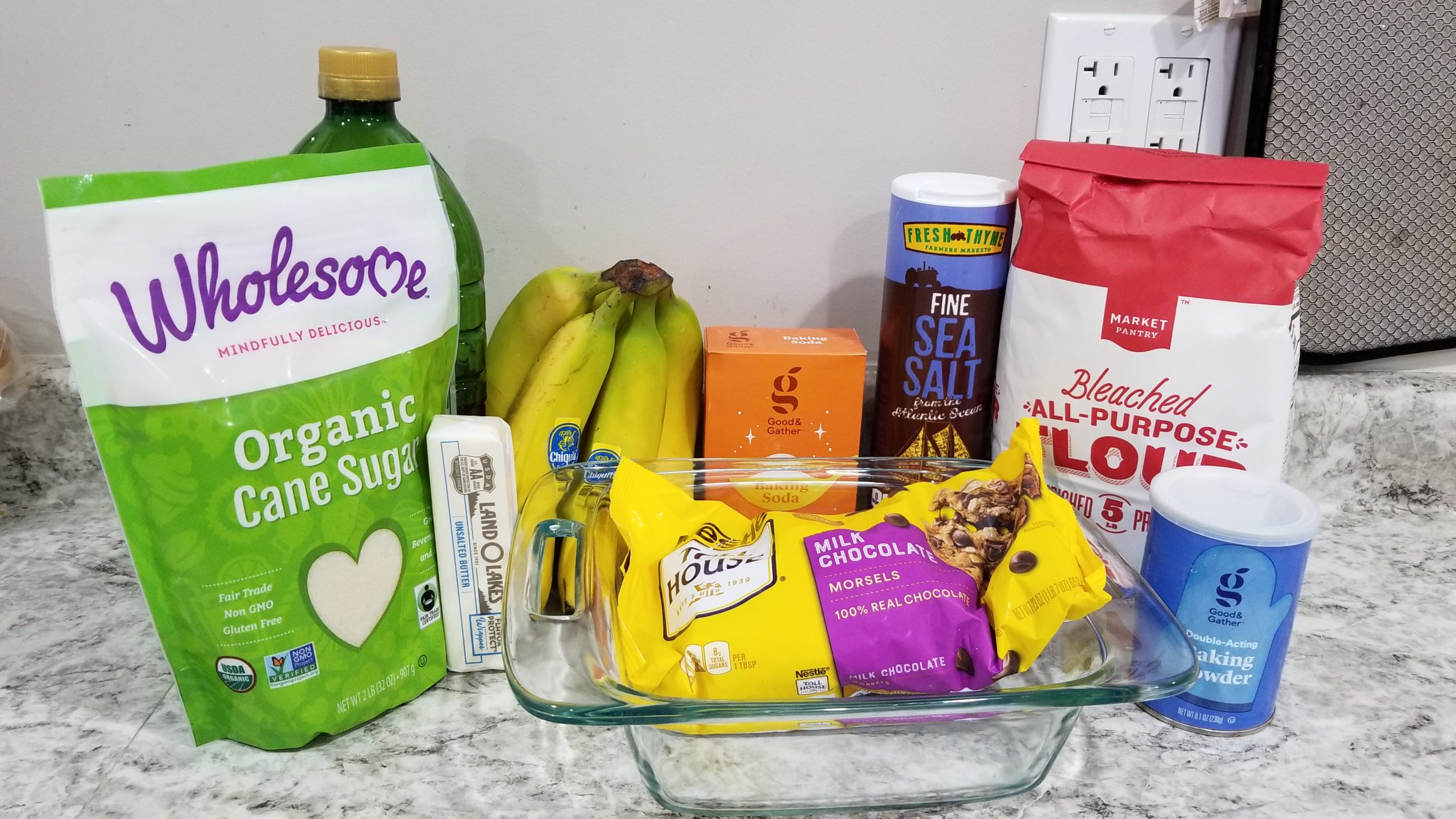 Chocolate chip banana bread is a staple in the homes of many, so I decided that this one would be a good fit for the chocolate-based series that I’ve been doing. Sure, banana bread might be tainted if it has chocolate chips in it, but calm down.

Everything’s better with chocolate, plus, it’s one of the five foods that a guy who lived to be 114 said kept him young:

This recipe is a spin on one that a buddy of mine at work used to make. He was bringing it to the office about every three months until the pandemic struck, so I figured I’d take matters into my own hands and make one myself. There’s no affiliate links in this recipe.

Grab your baking pan. The only one we had on-hand was this glass one. Actually, if you can, using a glass baking dish is the best way to do this. The only issue is that it’s pretty difficult to find a 9 x 5 glass dish.

Grab something to grease the pan. We used olive oil (1/2 a teaspoon). While the mix was going into the oven, it looked like there was too much olive oil. When it came out of the oven, that wasn’t the case. In fact, we needed at least a full teaspoon and maybe more, based on how much of the bread was stuck to the dish when it was done baking (you’ll see). That being said, it had a really good crust and the amount that got stuck to the dish might have been necessary. Grease at your own risk.

Greasing the dish. If there’s a global pandemic going on when you do this, either use a spray or one of those brushes for getting the dish lubed up instead of your hand.

Wash your hands after if you do go bare to grease the pan.

Swap out the pan for the first mixing bowl.

Grab the flower and a 1 cup measuring cup.

Pour the 1st cup of flour into the bowl.

Then get the second cup of flour in there.

Shake the flour around a little bit to remove any clumping.

Next, get your baking powder.

It had a funny lid on ours.

There are a lot of servings in there.

Throw 1 teaspoon of the baking powder into the bowl with the flower.

Don’t forget to close it when you’re done.

Mix it around a bit.

Did you know that baking soda did so much stuff?

Tear it open however it’s supposed to be done, this one had an easy open top.

Our easy open top was actually a hard open top that got mislabeled. After I tried our jackhammer under the sink and that didn’t work, this butter knife finally broke through.

Toss a teaspoon of the baking soda into your mixture.

Next, grab your salt.

Throw a teaspoon of salt into the snow-like mixture that you have at this point.

Mix it all around in the first bowl.

Set this bowl aside with the greased baking pan and grab one of the unused ones.

This one is for the bananas.

Get those ripe bananas. If you can pull this off with green ones, you let me know.

Pull the peel off the first banana and throw it in there.

Pick up the second banana.

Peel that sucka and throw it in with the other one. Looks like those guys are sword fighting in there.

Make sure your peels get in the trash, we wouldn’t want a Mario Kart spin out in your kitchen.

Third banana. You know what to do.

You will probably need to smash up your bananas like we did. I suggest using a mason jar to smash the bananas up.

Before smashing the bananas, now would be a good time to pre-heat your oven to 325F.

You can also cut up the bananas with that stir spatula before smashing them with the mason jar (or comparable smasher, maybe even your fist).

They should be about that much cut up before smashing them.

Using the bottom of a mason jar works great for this, as mentioned before. If you have a hammer for meat tenderizing, that would also be good.

The bananas should look something like this after smashing.

“Tell the other bananas what ya just saw.”

Grab some milk. It doesn’t matter too much which kind, however, the fat free skim milk used in this worked really well.

Pour a tablespoon of milk into the banana mixture. You can probably also just do a splash of milk if it feels weird to use milk with that measuring spoon.

We couldn’t find regular white sugar at Target (where most of the ingredients for this came from) so I decided the organic cane sugar they had was the next best thing. It worked pretty well.

Set the bowl of bananas and milk aside and grab the third bowl.

Make sure that the final bowl you use is the biggest one that you have since everything is going to get dumped into this one in a few minutes.

Dump one cup of sugar in the bowl.

Grab one stick of unsalted butter (or 1/2 a cup’s worth). It would help to leave a stick of butter out on the counter for an hour or two before started this recipe. Since an hour wasn’t enough time to get it soft enough, I threw it in the microwave.

In case you need to microwave it, grab a little bowl and break up the butter in it.

Our microwave was moderately clean this time around.

30 seconds on high power is more than enough.

Based on how melted it was, the microwave could have probably been on half power at 20 or so seconds to do this.

Dump (our pour) the butter into the bowl with the sugar.

Mix the butter and sugar around really well until it’s a fluffy consistency.

Grab some eggs, these came from our local Aldi.

Mix the first egg into the butter & sugar really well before adding the second.

Crack the second egg in there.

Go and get the banana/milk mixture to dump in with the sugar/butter/egg mix.

If it looks like puke, yea, sorry. Mix that up.

Mix it up until it looks tasty again.

Once that’s nice and mixed together, it will be time to grab the third bowl. You may want to use a butter knife to scrape the spatula off and put all the batter back into the bowl. Don’t lick it off, you might get salmonella because of the raw egg.

Get the other bowl of dry mix.

Dump that in the bowl with the other chocolate chip banana bread ingredients.

Make sure you have a big bowl. This one pictured was barely deep enough and I had to be careful mixing it at first so we didn’t spill too much of the dry mix out.

Once the wet and dry mix is combined thoroughly, get the chocolate chip cookies.

The chocolate we’ve been waiting for.

Layer in the chocolate while mixing it around, dump about 1/4 cup each layer.

The second layer going in.

Working the third layer in.

Last one. The chocolate chip banana bread mix will be getting pretty thick at this point.

Your spatula should be able to stand up straight in the mix when it’s ready for baking.

Grab the greased baking pan (or dish) from earlier.

Pour the chocolate chip banana bread mix in there, smoothing it out with the spatula.

You don’t want it to be overflowing since it will rise past the top during baking (at least the center will).

It should look something like this before going into the oven.

Scrape out any remaining chocolate chip banana bread mix from the bowl and put it in the baking pan.

Set the baking dish in the oven.

Your oven should be preheated to 325 degrees Fahrenheit by now.

It’s tough to see, but here’s a shot of ours about halfway through baking. As you can see, it’s risen up past the top of the dish.

Still tough to see, but here’s a better mid-baking shot.

This should be what it looks like at the end of baking, don’t dig in right away, though.

If you can stick a toothpick in the center and pull it out clean, you’ll know the bread is done. We didn’t have a toothpick, so I grabbed a meat thermometer. It worked just as well.

Use the flipping spatula to take the chocolate chip banana bread out of the dish and set it on a cooling rack. Our rack was in the dishwasher, so I improvised with a plate.

It will be tempting to start eating it right away.

Some got stuck in the dish. Not the end of the world, but it shows that we should have greased it more.

Once it’s done cooling, dig in! This one had a great “outer crust to moist-insides” ratio so I had to start giving it away to different people before I ate the whole thing and got sick. The banana flavor was great but not overbearing.

This serves 10, but those are generous servings. You can really consider it around 10-20 servings depending on the size of the pieces you cut.

The Recipe – about an hour an a half.

If you used this recipe to make banana bread, please share it with someone who might be able to use it, too! Thanks for reading!