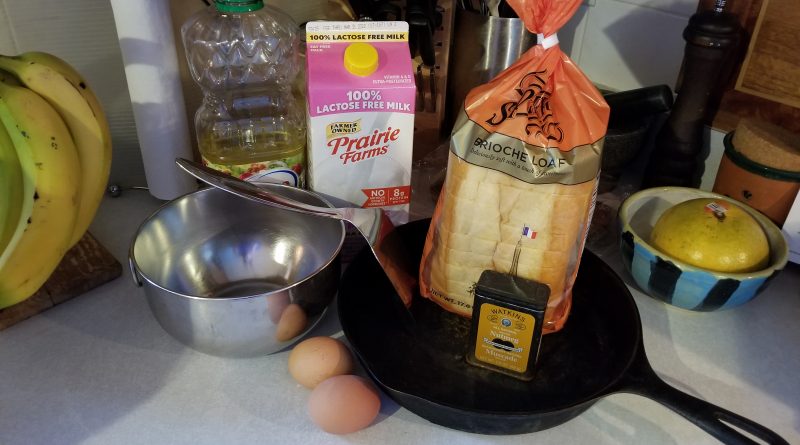 French toast recipe is what I’m throwing together in my kitchen today. We’ll be going over how to make this with a lot of documentation and pictures to follow along with. If you don’t want to go through it every step of the way, you can also skip to a notecard version of the recipe. All of the ingredients in this are available at your local Aldi store and are pretty inexpensive.

This is one of those things that might seem complicated to anyone who doesn’t see the prep work, but it’s actually pretty easy. This recipe serves two people (there’s two slices of French toast per person). You can feel free to throw whatever toppings you want on them – syrup, whipped cream, chocolate, fruit, etc.

The only optional ingredient that I’m including is nutmeg for seasoning. Some might argue that it’s necessary.

Let’s take a look at what you need to make this French Toast recipe.

Click to skip to notecard version of the recipe

You can throw this together in about 10 minutes for a quick breakfast. There might be another 10 minutes of cleanup, but overall, it’s pretty fast.

Next, get your eggs. You’ll be cracking them into it. I use the counter to crack the egg a little bit and then carefully open it up the rest of the way over the bowl.

I’m sure that you have your own style for cracking them. Just be careful not to drop egg shells into the mixture. Nobody likes to feel a crunch when they’re eating the French toast.

I had some of those weird brown eggs for this recipe. Alright, they’re not that weird, they’re actually the same nutritionally (I think). It’s just a matter of the breed of the chicken. Next, get your milk.

You’ll need to measure out 1/2 a cup of milk for this French toast recipe because that’s a core ingredient.

Now, pour your milk into the egg mixture.

It almost looks like yogurt in this picture. Anyways, once you pour all of that in with the eggs, it’ll be time to go and grab the measuring spoons and nutmeg.

You’ll need 1 teaspoon of nutmeg for this French toast recipe if you want to add some of that.

A little more or less won’t hurt anything.

It still kind of looks like yogurt in there, probably because of the egg. Anyways, after you dump the nutmeg in, mix it around. You can set the mixture aside for the time being.

Next, grab your bread for this French toast recipe. I’m using brioche in mine.

Make sure your toaster oven is set to light. I almost charred my bread, so if I did it again, I’d go lighter. You can probably get away with not toasting it at all because that’s just a consistency thing.

I definitely should have had the dials on 2 instead of 3. Oh well, you make everything once I guess. Once you get your bread in the toaster for this French toast recipe, pour the liquid mixture from before on to a plate.

After that, grab your cast-iron skillet and put it on medium-low heat.

Then, get your non-stick spray, butter, or cooking oil for this French toast recipe.

Coat the skillet with your cooking oil or whatever you’re using. This is important because otherwise the French toast recipe will get kind of messy and ingredients will stick to the cast iron. By now, your bread is probably toasted if you did that part. Once the skillet is hot, start soaking the bread in the liquid mix.

Get both sides coated well. This is important because if they aren’t, the French toast will taste weird.

Mine is a little too browned, as you can see. After both sides are coated, carefully set each piece in the skillet. I say carefully because it will probably be dripping a decent amount. You don’t want the batter getting on the stove or anywhere else. It’s important to move quickly so they cook at a decently even pace.

Flip each one once with a spatula. Once each side of those is properly browned, set them on a plate to serve.

Yea, mine might not be perfect looking. But ya know what? They tasted pretty good. That brioche bread had some sugar in it already, so I didn’t even need to add anything extra as far as toppings and stuff like that.