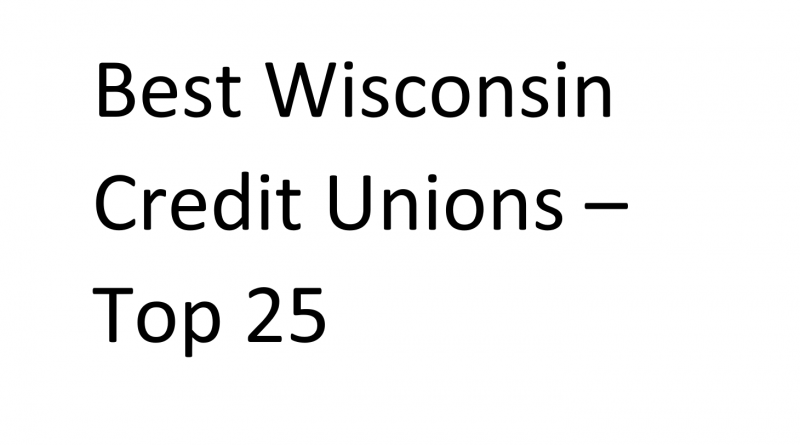 We’ll be taking a look at the best Wisconsin credit unions in this one. The major factors that play into who’s on this list are how many assets the CU has, size of their ATM network and branches, and additional important points like whether they give back at all.

Landmark Credit Union has total assets of $5.8 billion+ as of this writing, making them the biggest of the best Wisconsin credit unions to serve different parts of the state.

Every year, they financially support the United Way and have recently matched their Associate donations dollar for dollar to donate $175,000 toward benefiting southern Wisconsin communities. They also give back to many local organizations in the community as well.

All of their branch locations have an ATM, plus, there are over 4,500 fee-free ATMs in their Alliance One network. Landmark CU is a great place to put your money.

The second on our list of the best Wisconsin credit unions is Summit CU. They have $305 million+ in assets and are continuing to grow.

Summit focuses on supporting organizations that center around three major initiatives: financial wellbeing, women’s empowerment, and advancing equity. If any of those are important to you, then Summit CU may be a good fit for your money. They also have a bunch of community partnerships with orgs like CEOs of Tomorrow and Girl Scouts.

They offer all the usual products that a credit union would. Additionally, there’s others like insurance, so all your financial needs can be met.

Community First Credit Union is third in our list of the best Wisconsin credit unions. They have assets of $4.3 billion+ today, not too shabby!

Believe it or not, there’s enough people in the UW school system to support a pretty big credit union. It started at Madison and now pretty much anyone with ties to the system can be a part of a one of the best Wisconsin credit unions.

They have over $4 billion in assets, making them a sizable CU.

They support a bunch of charities and have given a lot of money over the years. Supported organizations include ones like United Way of Dane County and 100 Black Men Madison.

Over 4,000 ATMs between their branches and the Alliance One ATM network that they’re part of.

Royal CU has $3.4 billion+ in assets. As far as community involvement goes, they are involved with financial education programs, financially supporting a lot of different groups like public libraries and the Boy Scout troop in Rice Lake.

RCU’s ATM game is on point. They have nearly 30,000 ATMs nationwide through their involvement with the CO-OP credit union program. Definitely a reason to be in the top 5 best Wisconsin credit unions.

Connexus might beat everyone else in this list for ATMs, since they have 54,000+ surcharge free through their involvement in the CO-OP and MoneyPass networks.

Over $2.6 billion in total assets. They give back to the community financially, by their staff volunteering, and through financial literacy programs. In the last few years, they’ve given over $1.8 million dollars to different Wisconsin charities. They also have scholarships for college students.

They have over 60,000 ATMs in their network, I guess number 6 wasn’t the biggest after all.

Over $2.3 billion in assets

Definitely one of the best Wisconsin Credit Unions for community support, CoVantage is involved with a ton of different organizations. Those include the Alzheimer’s Association, Ducks Unlimited and Boys & Girls Club.

Their ATM network is over 30,000 since they are part of the Alliance One and CO-OP Networks.

They like to support the communities that support them. FCCU supports groups like Coats for Kids and Toys for Tots, among other charities.

They have over 4,500 ATMs through their involvement with the Alliance One network.

Over $1.9 billion in assets

Community involvement is a big deal at Altra, getting them a spot in our best Wisconsin credit unions list. They organize holiday events, have a mascot that goes to things like parades and baseball games, hold youth seminars for financial education, and donate time/money to give back.

ATMs: Nearly 30,000 through their affiliation with CO-OP’s shared network.

Over $2.1 billion in assets

Their motto is “Doing the Right Thing.” They support a few charities, including St. John’s Homeless Center and the Christine Ann Domestic Abuse Services.

They’re in the Alliance One ATM network, so, there are over 4,500 ATMs to choose from.

Over $1.1 billion in total assets

Their saying for charity is “Kindness Counts Pass It On!” and they support the community in a number of ways. Those include volunteerism, non-profits, schools, youth arts, sports, financial education and other events.

ATM locations: over 4,500 through the Alliance Once network.

Verve is another one of the best Wisconsin credit unions.

Over $1 billion in assets.

Verve earmarked $50,000 in 2020 to help support local organizations by matching donations made to community foundations.

They contribute financial support and their employees volunteer time with a lot of organizations. Some of those are community food pantries and Habitat for Humanity.

ATMs: part of the Alliance One network, 4,500+ nationwide

Philanthropy: It doesn’t look like they give back in specific ways, however, they do have a system for you to easily allocate a portion of your money toward giving back. Although, that just seems like an auxiliary feature of their standard budgeting tool.

ATMs: they are part of the Moneypass ATM network, so, there’s probably about 32,000 ATMs nationwide that you can access fee-free through them.

Over $750 million in assets

Do they give back? Yes, helping with hunger, financial literacy and other ways.

ATMs: BCCU doesn’t look like they have any ties to big ATM networks, leading me to think that they probably only have a few.

Over $500 million in assets

They support the community through various sized financial contributions, either small (under $500) or large (over $500).

ATMs: Looks like they only have a few ATMs here as they are not part of any expanded networks. Not necessarily one of the best Wisconsin credit unions as far as ATMs go.

Over $500 million in assets

They do give to charity and have open requests for donation, with some restrictions.

ATMs: CO-OP network gives you access to 30,000+ surcharge-free ATMs across the U.S.

They give back in a bunch of different ways like Meals on Wheels and Toy drives.

They are in the Alliance One and Sum ATM networks, so, expect at least 4,500+ ATMs nationwide.

ATMs: nearly 5,000 available through their Alliance One involvement.

Over $450 million in assets

They volunteer and give a lot of donations, which is great.

They are in the Alliance One ATM network, so, that means 4,500+ ATMs for you! A lot of the best Wisconsin credit unions are part of that network.

Simplicity has assets of more than $225 million.

They do give back in a few ways, there’s a donation request form on their website (here) and they have a scholarship available.

They have $121 million in assets and growing.

They support a lot of different organizations through their charity work. Those include the Badger Childhood Cancer Network, Bike the Barns, and Domestic Abuse Intervention Services.

ATMs: Over 37,000 since they’re part of the MoneyPass network.