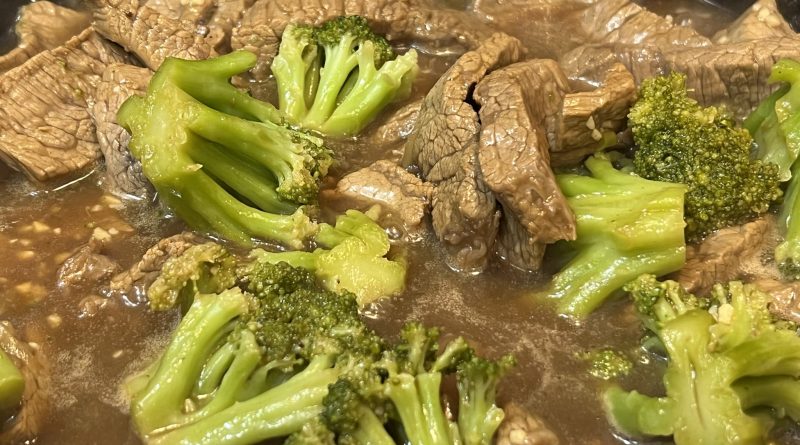 Beef and broccoli recipes are not as hard to make as you think. The most complicated part is chasing down the different ingredients for the marinade, so once you have those, you’re off to the races. This makes an awesome dinner any time of the year and it doesn’t take too much time to make.

It doesn’t hurt to own a wok pan, but I made this in a cast iron skillet, and it was still pretty good.

Click to Skip to the notecard version of the recipe

What You’ll Need to Make This Beef and Broccoli Recipe

Let’s start things off by cooking your rice. One thing that I’ve noticed in other beef and broccoli recipes out there is that they never mention the rice. Pretty much any time I’ve ordered this at a restaurant ever it’s come with that as a side, so I figured I’d make that part of the recipe.

I always soak rice now before cooking it. While this isn’t necessary, there are a couple benefits that I won’t dig into here.

If you use something like Jasmine rice, you don’t need to soak it, although washing it is good.

Pour 6 cups of water into the pot and set to medium-high heat. It takes about 20 minutes to cook, so here’s a timer you can set for that (silent mode on iPad/iPhone needs to be off for alarm to work):

Stir it occasionally so the rice doesn’t get stuck to the bottom of the pot. While that’s cooking, you can start to make the marinade for the beef and broccoli recipe.

To do that, grab your apple cider vinegar and measure out half a cup of that.

Pour it into a medium to large sized mixing bowl and follow that by pouring in a 1/2 cup of water.

Then, get your oyster sauce for this part of the beef and broccoli recipe. If yours is also 9 ounces, that’s about a cup since some will stick to the sides of the bottle. You can just pour the whole bottle in if that’s the case or measure out 1 cup of it.

Next, get your soy sauce and measure 1.5 teaspoons of that into the mixing bowl.

After that, get your sesame seed oil and measure 2 teaspoons of that into the bowl for this part of the beef and broccoli recipe.

Once that’s in there, dump your 1 teaspoon of corn starch into the mixing bowl.

Mix everything around with a large spoon, then grab your garlic.

Measure out 2 tablespoons and throw those into the bowl, too. After the garlic (this step isn’t pictured) put 1 tablespoon fresh ginger root in.

Following that, grab a cutting board, big knife, and your meat. Ideally, the meat will already be separated into 1/3-pound chunks like mine is here.

Slice the meat into thin strips. Once they’re all sliced up, put them into the bowl with the marinade for this part of the beef and broccoli recipe.

At this point, you could let the meat marinate for a little while. In my case, I only did for about 10 minutes. Here’s a 10-minute timer if you want to do that:

Next, cook and chop up your broccoli. In my case, I used frozen broccoli that was in a bag, so all I had to do was throw it in the microwave. If you buy broccoli from the produce section, putting it in a microwave-safe bowl with some water for about 4 minutes will get it cooked pretty well. 3-4 tablespoons of water should be fine.

After that, for this part of the beef and broccoli recipe, set a skillet on your stove to medium-high heat with 2 tablespoons of cooking oil in it.

Once that’s heated up, put the meat with some marinade into the skillet. How much marinade you put in really depends on how big your skillet or wok is. If it was being cooked in an Insta Pot or a huge skillet/wok, I would include all of the marinade. For a skillet the size of the one I was using, the most I could include was about half of it.

The image actually shows way too much going in with the meat, I poured some back out into the bowl after taking this.

Cook that until the meat isn’t pink anymore. It should take about 3 minutes per side. Make sure they all get spread out pretty evenly, so everything gets done about the same time (and not over done!). Once it’s cooked, the beef and broccoli recipe should yield results like below:

Sorry if I made your mouth water. There you go, a tasty beef and broccoli recipe that you can enjoy any night of the week. The sauce goes great with the rice.

This feeds three people and you’ll likely have some rice left over.